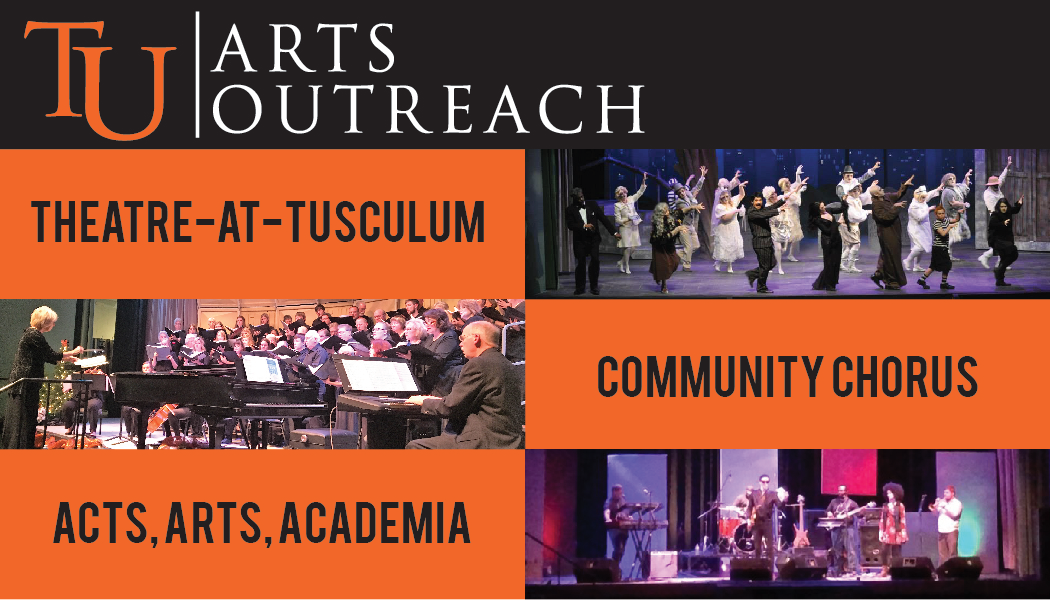 GREENEVILLE – The smash hit musical “Company,” which explores relationships and the struggles of sustaining them in urban America, is coming to Tusculum University for a six-performance run in November.

“We are ecstatic to bring such a renowned production to Tusculum so the community can enjoy another first-class musical on our stage,” said Beth Schnura, the director of “Company” and director of Tusculum Arts Outreach. “The cast will showcase its exceptional talent and thoroughly entertain audiences while presenting them a storyline that has a great deal of depth. Seeing this musical in person will bring the messages to life in a vibrant way for our audiences.”

GREENEVILLE – East Tennesseans can enrich their Halloween experience by watching adaptations of classic literature and new writing from a Tusculum University alumnus in a series of upcoming short performances at the Doak House Museum.

The event is a fundraiser for Tusculum’s arts programming.

GREENEVILLE – Another stellar production is coming to Tusculum University this month, a dark romantic comedy featuring two regional theater veterans that examines relationships and communication through a restrictive lens.

“Lemons, Lemons, Lemons, Lemons, Lemons” will begin a six-performance run Friday, Sept. 23, at 7:30 p.m. in the Behan Arena Theatre, located on the lower level of Annie Hogan Byrd Fine Arts Center. The play stars Steve Schultz and Erin Hensley Schultz, who are married in real life and serve on the Tusculum staff, as the only two actors in this contemplative play.

“As we continue Theatre-at-Tusculum’s tradition of excellence, we are pleased to present a thought-provoking play that utilizes the remarkable talents of Steve and Erin,” said Wayne Thomas, executive director of Tusculum Arts Outreach and the production’s director. “This play will have an enjoyable, fast-paced feel and plenty of humor while still offering a serious theme well worth consideration.”

GREENEVILLE – When you ask Jennifer Hollowell to name her favorite productions at Tusculum University, it is a challenging task for her because she has assisted with so many.

Hollowell has been in the thick of Tusculum productions for about 20 years, handling behind-the-scenes tasks and running the box office for shows in the Annie Hogan Byrd Fine Arts Center as coordinator of Tusculum Arts Outreach. In the last year, she took more of a front-seat role as director of Tusculum’s Center for the Arts.

Now, Hollowell’s connection to Tusculum has shifted to future spectator at performances and volunteer with Arts Outreach and the College of Civic and Liberal Arts. She retired from Tusculum May 31 and is now spending what remains of her working days focusing on her food catering interests.

GREENEVILLE – Tusculum University is hosting multiple summer camps, some of which will be available twice, that will provide children of all ages an opportunity to grow their skills and absorb the collegiate atmosphere.

The fun and informative activities start in early June and last until late July on the Greeneville campus. They include learning about life in the early 19th century, exploring food history through the natural environment, further exploring an interest in health professions and discovering the on-stage and behind-the-scenes elements of theater.

“If children want to have a great time and learn a lot in the process, Tusculum University is the place to be this summer,” said Greg Fay, director of continuing education and camps. “We are thrilled to offer children an excellent way to participate in active and experiential learning with our faculty, staff and students. Our beautiful and historic campus will provide an outstanding backdrop for participants as they join us for a bevy of fun activities.”

GREENEVILLE – The Tusculum University Community Choir invites everyone to campus for an uplifting concert of beautiful music – and an opportunity to sing during one of the songs.

Performing at 7:30 p.m. Monday, April 25, in the Marilyn duBrisk Theatre of Annie Hogan Byrd Fine Arts Center, the group will offer a nice array of songs ranging from spirituals, such as “Ride the Chariot,” to contemporary choral music, such as “A Boy and a Girl.” The concert will include solo performances as well as one song that features only the men and another that will highlight only the women.

The concert is free, but donations are welcome.

GREENEVILLE – An important and treasured part of childhood for many people was the “Schoolhouse Rock!” segments they watched during the Saturday morning cartoons.

Featuring iconic songs such as “I’m Just a Bill,” “Interjections!,” “Conjunction Junction” and “The Preamble,” these energetic short segments have entertained and educated generations of children. Now, Theatre-at-Tusculum is bringing these and several other songs from this beloved series to the Behan Arena Theatre at Tusculum University for six shows in April.

“Schoolhouse Rock Live! Jr.,” directed by Beth Schnura, will feature a cast of 27 from ages 8-18, along with the talents of the Theatre-at-Tusculum staff and community volunteers. Schnura grew up watching these segments, so this production is a labor of love.

GREENEVILLE – Caleb Johnson, the season 13 winner of “American Idol,” will bring his powerful vocals to Tusculum University for a fundraising concert that will energize the crowd and enable the university to continue bringing major acts to the area at affordable prices.

Johnson will hit the stage at 7 p.m. Saturday, April 23, in the Marilyn duBrisk Theatre with his band, the Ramblin Saints, and will continue to rock well into the evening. He will bring his special brand of rock, honed in hits such as “I Just Want to Celebrate” and “Glory Bound,” to an audience yearning to hear his thunderous voice.

“Kick-start your spring on our campus with one of the best young talents in the business,” said Jennifer Hollowell, director of Tusculum’s Center for the Arts. “Caleb’s terrific vocals will pulsate the theatre, and the crowd will feed off his passion to present rock-n-roll at its finest. You won’t want to miss one of the rising stars in rock at a bargain of a price.”

GREENEVILLE – Community members and the Tusculum University family are invited to a moving recital by the higher education institution’s director of bands that will use music to highlight the emotions of the pandemic and hope as the nation emerges from it.

Dr. David Gonzalez, who has served at the university since the summer, will perform a free concert at 7 p.m. Tuesday, March 22, in the Marilyn duBrisk Theatre of Annie Hogan Fine Arts Center on the Tusculum campus. He will play the euphonium and be accompanied by pianist Devin Lyon.

“Since I have joined the Tusculum faculty and restarted the music program, I have enjoyed meeting people throughout the region to discuss our plans,” Dr. Gonzalez said. “This performance will build on those connections by sharing our mutual love for music. I look forward to spending the evening with our guests and fellow Tusculum family members on our beautiful campus as we explore through music a topic that has impacted all of us.”

GREENEVILLE – An experienced theater professional who has performed and worked behind the scenes in productions in Greeneville for the last five years has been named Tusculum University’s director of arts outreach.

Beth Schnura has served as a freelance director and lighting technician for Theatre-at-Tusculum and the Greeneville Theatre Guild since 2018. Earlier in her career, she served for seven years as auditorium coordinator at Lincoln-Way West High School in New Lenox, Illinois, where she directed more than 20 plays and seven musicals.

GREENEVILLE – The Tusculum University Community Chorus returns with its annual Christmas concert and a new twist – a medley of songs in which the audience will be invited to participate.

The concert will take place at 7:30 p.m. Monday, Nov. 29, in the Marilyn duBrisk Theatre of the Annie Hogan Byrd Fine Arts Center on Tusculum’s Greeneville campus. It marks the chorus’ first performance since the global coronavirus pandemic reached the region.