By Tusculum University on February 8, 2019 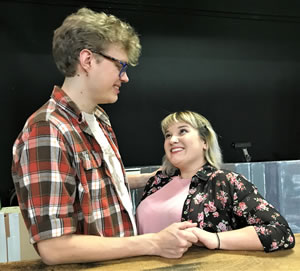 Maxwell Reed as Seymour, left, and Molly Doss as Audrey will perform in Theatre-at-Tusculum’s presentation of “Little Shop of Horrors.”

With tongue firmly planted in cheek, “Little Shop of Horrors” never fails to entertain with its story about Seymour Krelborn, a down-and-out skid row floral shop assistant, who becomes an overnight sensation when he discovers an unknown plant species that has a mysterious craving for fresh blood.

Soon the plant, affectionately named Audrey 2, grows into a manipulative, rhythm-and-blues-singing carnivore that offers Seymour fame and fortune in exchange for feeding its growing appetite. The plant finally reveals itself to be an alien creature poised for global domination.

This spoof of 1950s Sci-Fi movies has become a household name, thanks to a highly successful film version and a score by the duo of Howard Ashman and Alan Menken (Disney’s “The Little Mermaid,” “Beauty and the Beast” and “Aladdin”). The “Little Shop of Horrors” musical, which premiered in May 1982, is based on the 1960s Roger Corman Sci-Fi horror flick of the same name starring a very young Jack Nicholson. A 1986 movie version of the musical directed by Frank Oz and starring Rick Moranis and Ellen Greene is considered a cult classic.

The Theatre-at Tusculum production is being directed by Brian Ricker and will take place in the Behan Arena Theatre in the lower level of the Annie Hogan Byrd Fine Arts Center at Tusculum University in Greeneville. The show will span two weekends with performances on March 1, 2, 7, 8, 9 at 7 p.m. with matinee performances on March 3 and 10 at 2 p.m.

Ricker, assistant director of Tusculum University Arts Outreach and a veteran actor of the Greeneville stage, has directed successful productions for Theatre-at-Tusculum and the Greeneville Theatre Guild, including “The 25th Annual Putnam County Spelling Bee,” “Urinetown: The Musical” and Tennessee Williams’ “Cat on a Hot Tin Roof.” 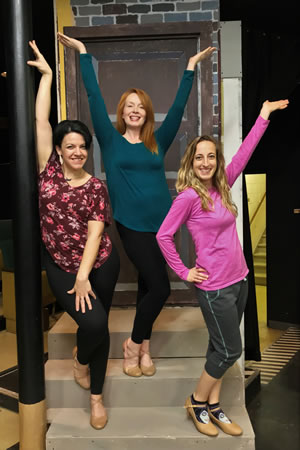 Left to right, Erin Schultz as Ronette, Jodie Carter as Crystal and Sara Claiborne as Chiffon will perform in Theatre-at-Tusculum’s presentation of “Little Shop of Horrors.”

“Little Shop of Horrors” features many of the area’s favorite actors, including:

Playing the sinister and sadistic Orin Scrivello, D.D.S., will be Tusculum student and Nebraska native Trevor Kahland who made his Tusculum theater premiere in “Tarzan” as the great ape, Kerchak. Voicing the soulful Audrey II will be Greeneville native Jason Shoemaker. Rounding out the cast are three local actresses who will amaze audiences with their talented voices: Jodie Carter, Sara Claiborne and Erin Schultz as the trio of skid row dwelling street urchins.

“Little Shop of Horrors” is musically directed by Kasie Shelnutt and choreographed by Heather Allen. The show will be stage managed by Christian Emery-Howard, with set design by Frank Mengel and Garry Renfro and lighting design by Beth Schnura.

Tickets are $15 for adults and $12 for Seniors (60+). The show is rated PG-13 for some gruesome and gory content as well as strong language. Seating is general and is first come, first served. The ticket box office will open 90 minutes prior to each show time, with the house opening 60 minutes prior to each show time. Tickets may be purchased with cash or check only. No credit or debit cards will be accepted. To reserve tickets please call 423-798-1620 or email jhollowell@tusculum.edu.

Theatre-at-Tusculum is under the auspices of Tusculum University Arts Outreach which is led by Artist-in-Residence Marilyn duBrisk, Assistant Director Brian Ricker, Coordinator Jennifer Hollowell, Technical Director Frank Mengel and Costume Director Erin Schultz. It is supported in part by a grant from the Tennessee Arts Commission, Hearts for the Arts, and many generous donors. For more information about this production or other programs, please contact the TUAO office at 423-798-1620 or visit arts.tusculum.edu or Facebook: Tusculum University Arts Outreach.