By Tusculum University on October 6, 2011 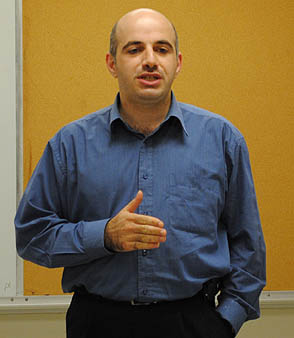 Dr. Mazen Alsaqa, an Iraqi refugee now living in the United States, spoke about persecution of Christians in the Middle Eastern country during a presentation Wednesday at Tusculum College.

Dr. Alsaqa, who is living in Michigan and studying to receive his certification to practice medicine here, told of the persecution of Christians that began after the start of the Iraq War and still continues.  Dr. Alsaqa was on campus as part of his visit to Northeast Tennessee as part of the Presbyterian Church (U.S.A.)’s Peacemaking Program. He also visited the Emmanuel School of Religion and First Presbyterian Church of Greeneville on Wednesday.

A seventh-generation Presbyterian from Mosul (the city that was called Ninevah in Biblical times), Dr. Alsaqa explained that Christianity has had a presence in Iraq since the foundings of the faith, noting that converts from Mesopotamia (present day Iraq) are mentioned in the New Testament book of Acts.

Christians make up three percent of the population in Iraq, about 1 million people, he noted. While several denominations exist in the country, the largest numbers are found among Catholics and Greek Orthodox believers.

Under the rule of Saddam Hussein, Christians lived in a peaceful situation in the predominantly Muslim country, Dr. Alsaqa said. He explained that Christians of the various denominations had made a decision long ago to not get involved in the politics of the nation, so the ruling parties were not afraid of an insurrection coming from a Christian faction and left them alone.

“That is not to say we thought that Saddam was a good leader, but we did not believe that military action was the way to change the government,” he said.

However, Christians began to come under attack once the Iraqi War started and freedom came. “With freedom came weapons, and al Qaeda have those weapons,” he said.

In 2004, church bombings began and in the next two years, 16 churches were bombed, Dr. Alsaqa noted.

When the bombings did not deter Christians from continuing to meet and rebuild their churches, the attacks entered a new phase in which pastors and other church leaders were kidnapped or murdered or both. Dr. Alsaqa’s father, who was a senior elder in his church, was kidnapped in 2006 and later murdered. By 2010, 45 leaders had been killed and in the past seven years, 16,000 Christians have been killed, Dr. Alsaqa noted.

One of the most encouraging things from his experiences, he said, was seeing how his fellow Christians reacted to these attacks.  Although it took longer to replace pastors because of the process involved, when lay leaders were killed, others immediately stepped up to take their position.

The persecution still continues, he continued, describing a bombing in May 2010, in which 70 people were killed in a church in Bagdad. Among those who died were all the members of six families, he said, and the church was inside an area surrounded by checkpoints.

Many church leaders struggled with the question of whether to hold services in their churches, particularly at special times such as Easter. For the holiday, many churches designated places that people could meet and worship that were not the church building, he said, and people still continued to come to the services inside the church.

The Christian church in Iraq does have the sympathy of many of their Muslim neighbors who do not agree with the attacks, Dr. Alsaqa said.

However, these moderates are not the extremists who have the weapons, he said. When the diverse groups try to work together to bring peace to the country, those extremists with the weapons plan attacks to disrupt the process, Dr. Alsaqa continued.

He explained that Christians generally are not armed, and also make up a good percentage of doctors, lawyers, teachers and other professionals in the country, but not the military or police.

When he was younger, Dr. Alsaqa said he purchased a weapon for protection, but when his father saw it, he asked his son if he was prepared to use it. His father told him that if he used his gun to kill, he would be no different than those in al Qaeda.

After leaving Iraq, Dr. Alsaqa spent two years in Jordan before he was granted refugee status in the United States. Having family in Michigan has helped him make the transition to life here, he said, but the Presbyterian Church also has a ministry to help the persecuted Christians in Iraq and the refugees who then come to the United States and may not be as fortunate as him to have relations or friends in the country.