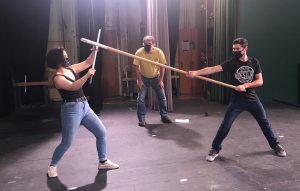 Left to right, Rachel Phillips, Frank Mengel and Todd Wallin rehearse a scene from “The Tragedy of Macbeth.”

One of the Bard’s most famous plays will take the stage at the Annie Hogan Byrd Fine Arts Center Theatre on Tusculum University’s Greeneville campus. Brian Ricker will direct the one-act edition, which features many local actors.

“We are excited to present this one-act version to the community and continue our tradition of high-quality performances at Tusculum,” Ricker said. “We want audiences to experience the quality of a Shakespeare play, and our performances provide that in an enjoyable manner.”

After the murder, Macbeth ascends to the throne, and as he is slowly driven mad by guilt, he leads the country into turmoil as a murderous, tyrannical ruler. Macbeth’s fellow Scottish nobles, led by Macduff, played by Christy Hoeke, and Duncan’s son Malcolm, played by Jackson Beddingfield, orchestrate a revolt.

“It’s an action-packed production,” Ricker said. “It features lots of fighting and intrigue. With this one-act edited version, audiences can focus on the story and the fast-paced rise and fall of Macbeth.”

Those who are interested in seeing a performance may email Jennifer Hollowell, Box Office manager, at jhollowell@tusculum.edu or call Tusculum Arts Outreach at 423-798-1620 to reserve tickets. Seating will be limited for the production due to the global coronavirus pandemic, and audience members must wear a face covering and observe physical distancing. Touch-free temperature checks will take place upon entry prior to each performance for the safety of all guests.

Theatre-at-Tusculum is under the auspices of Arts Outreach, which is supervised by Wayne Thomas, dean of the College of Civic and Liberal Arts, and is led by Brian Ricker, Arts Outreach assistant director; Coordinator Jennifer Hollowell; Technical Director Frank Mengel; and Costume Director Erin Schultz. It is supported in part by a grant from the Tennessee Arts Commission, Hearts for the Arts, a Walmart Inc. local community support grant as well as many generous donors and volunteers.

For more information about Theatre-at-Tusculum or other Arts Outreach programs please call 423-798-1620, visit http://arts.tusculum.edu or find on Facebook at Tusculum University Arts Outreach.