Students were invited to submit creative works for the festival’s contests in poetry and fiction, and Tusculum College English majors Macy French of Kingsport, Jennie Frost of Friendsville, Sarah Holly of Johnson City and Emily Waryck of New Concord, Ohio, were selected as finalists in the poetry category. Also attending was student Emily Watson of Watauga.

French’s poem, “Nature and Nurture in Binary,” was selected as runner-up winner in the poetry category. Work of the poetry finalists were read and discussed in a poetry panel comprised of poets Ricardo Pau-Llosa, Cathy Hankla and Jeanne Larsen.

“It was a treat to see our students praised so highly by attendees of the festival. Hollins’s contest pool was quite large and impressively talented,” said Patterson.

“I can say with confidence that Tusculum College’s creative writing program is one of the best undergraduate writing programs currently operating, and I feel that folks outside of Tusculum are recognizing that fact more and more. The writers who come out of our program are being published in esteemed journals, winning awards, being hired for internships and jobs and getting into top-notch graduate school programs. We can now add more success at Lex Allen to our long and lengthening list of our students’ achievements.” 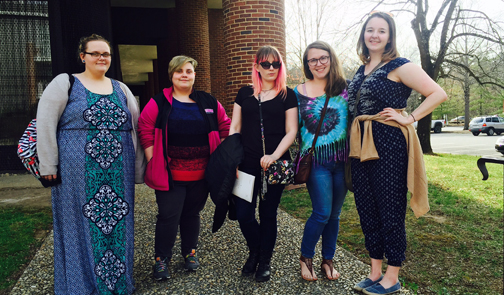