Pierce, a senior creative writing and political science major from Elizabethton, served as a McNair scholar this past summer, and having completed the program, applied and received the advanced research fellowship to further efforts on the research proposal he developed during the summer program.

The preliminary research proposal he developed last summer earned him the advanced research fellowship that will enable him to continue the research. Ideally, the project would be a direct follow-up of the summer proposal; however, Pierce simplified the project to something more personal for his academic year research. 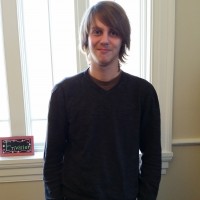 The summer McNair program at ETSU allows first-generation undergraduates who meet income requirements to participate in graduate-level research to better prepare them for graduate school. During the summer of 2016, Pierce developed an idea of analyzing the correlation of language skills, particularly the English language, and how those skills affect an individual’s idea of social power.

“My hypothesis was that people who had less developed language skills would be less able to conceive themselves as having agency, so they were less able to imagine themselves as having control over their own lives because their language skills were less developed. If you don’t have power over your own language, you’re going to have to rely on other people to create your narrative for you,” said Pierce

“Ultimately what I decided to do was to investigate the presence and significance of Appalachian English in Carter County, which is where I’m from,” said Pierce. “I found some research that looked into the affect on students’ experience in classrooms and on standardized testing when they speak nonstandard English, which is what really sparked this direction of the project. Usually it has a negative impact, and speakers of dialect—of Appalachian English, in particular—tend to internalize the negative stereotypes about themselves from cultural signals they receive. I wanted to build this narrative of what Appalachian English is in Carter County.”

For his research, Pierce created four focus groups divided by age: under 18, 19-39, 40-59, and 60 years and over. He found participants from local high schools, churches, and businesses. Each group, which contained 6-8 people apiece, would answer a survey that contained socioeconomic questions, religious questions, and questions about how they thought their language intersected with their social identity.

Pierce interviewed the groups and collected data on what common experiences people in the same age group shared, as well as their attitude towards that group identity, and then compared the answers between the age groups.

“I just wanted to see how, in this community this dialect was still alive, what it looked like and what that meant,” said Pierce. “I wanted the people of this community to have a chance to create the narrative themselves about what it means to be speakers of this dialect. I didn’t want to take data from them, I wanted them to be able to say in their own words, what it meant to them.”

“I think I was able to win because of the true support and the thankfulness and gratefulness I have for the people that work at SSS,” said Pierce. “They do so much for us, especially for those of us that really engage and develop relationships with them. They helped me navigate the more bureaucratic aspects of college that, as a first-generation student, I wouldn’t have had the wherewithal to deal with on my own.”

By Madilyn Elliott, a senior journalism and professional writing major from Hampton