By Tusculum University on December 4, 2017

Dr. James Hurley, president of Tusculum College, has appointed Dr. Andrew Buzzelli as executive vice president of the newly-created College of Health Sciences. He will assume his role on January 1.

“We are proud to welcome such a highly-respected leader in health science to our community and campus as we embark on this bold new vision to improve access to quality health care in Central Appalachia,” said Dr. James Hurley. “Dr. Buzzelli is a tireless advocate for both health care and education, and as such, is the ideal leader to propel our new College of Health Sciences forward. This is an exciting day for our institution, our students and our future.”

In his new role Dr. Buzzelli will lead the efforts to begin several new programs that are currently in the feasibility study stage and will fall under the new College of Health Sciences, including a School of Optometry, a physician assistant studies program, as well as occupational therapy and physical therapy programs.

In his new role, Dr. Buzzelli will work with Tusculum leadership to establish several new programs under the College of Health Sciences, including a School of Optometry of which he will serve as founding dean. He will administer the preparation of materials and documentation required for accreditation of the school by the Accreditation Council on Optometric Education. He will also ensure that the academic and patient care missions of the college are accomplished.

In his role, he will also provide leadership for recruiting and retaining highly-qualified faculty, staff and students.

Dr. Buzzelli received his doctorate in optometry from the Illinois College of Optometry in Chicago. He holds a Master of Science degree in child development and visual perception from the State University of New York. He has practiced in the private health care sector as a specialist in dysfunctions of binocular vision and visual information processing disorders. Academic appointments include the State University of New York, Salus University, where he was also appointed to the board of trustees, and Georgian Court University.

A noted international lecturer, Dr. Buzzelli served as a consultant to the National Aeronautics and Space Administration for the medical protocols currently utilized on the International Space Station. The author of more than 25 articles in both optometric and military publications and a recognized expert in the field of chemical and biological weapons, Dr. Buzzelli authored the first-ever ophthalmic textbook series for the treatment and management of injuries resultant from terrorist attack. 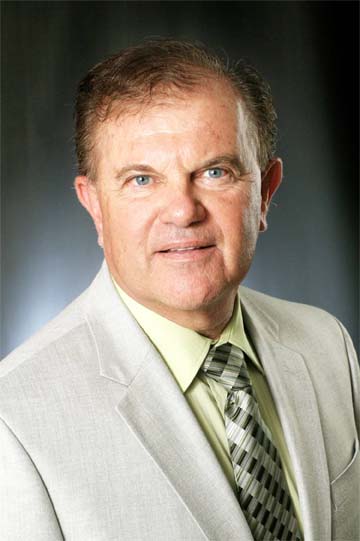 “Like all who come to the treasured halls of Tusculum, I have come for multiple reasons. Chief among those are legacy. My wife Debbie’s Uncle Leon and Aunt Nancy Leslie were Tusculum supporters in all of their years,” said Dr. Buzzelli. “Our family all knew Tusculum through his election to the Football Hall of Fame and the Board of Trustees. Tusculum DNA is part of our family’s heritage. I will walk daily past the plaques commemorating the dormitory spaces, classrooms and special programs they have donated over the years.

“The critical part of the Tusculum legacy I come to fulfill is one that since 1794 resides in every home where a diploma from Tusculum rests – responsibility. This has existed as one of our core values since the great arch was constructed. Our new College of Health Sciences will produce the future health care providers for many of the health services still lacking in parts of our great state of Tennessee, Appalachia and other parts of the rural Southeast. I come to work with Dr. James Hurley and the Tusculum community to design, create and prosper the College of Health Sciences, which will fulfill our well-known commitment to civic engagement through health care for those who depend on our success.”

A retired colonel in the United States Air Force, Buzzelli has held command positions as the chief of optometry for the 105th Military Airlift Wing and commander of the 105th Medical Group. He served as the assistant to the command surgeon for Air Force Material Command and was selected as the chief advisor to the Air Force Surgeon General on matters of policy, operations and utilization of the entire 107,000 membership of the Air National Guard.

“There are no words to express the amount of enthusiasm I have for this program to come to Tusculum, said student Katherine Lewis. “When President Hurley announced his interest in starting a college of optometry at Tusculum, I jumped at the chance to reach out to him and emailed him right away. When I heard it was confirmed, my heart stopped, tears came to my eyes, and all I could do was smile and laugh with excitement. This changed my plans for everything. Tusculum starting this program allows me to stay close to my hometown, and study in a community I have grown to love. Tusculum will be the 23rd school in the country to be adding this program, and I look forward to being a part of the foundation.”