Students, faculty, staff, alumni and many members of the community gathered on Thursday, Oct. 19, to dedicate the new Meen Center for Science and Mathematics on the Tusculum College campus.

Many in the Tusculum community have been watching excitedly as the Ronald H. and Verna June Meen Center for Science and Math reached completion. The building will meet strategic needs as the college continues to grow in enrollment and programming offerings.

The dedication included a tribute to the late Verna June Meen who asked that the building be named in honor of her late husband, Dr. Ronald June Meen. The dedication prayer was issued by Rev. Angus R. Shaw III, a life trustee of Tusculum College. Other speakers included Dr. Kenneth A. Bowman, chair of the Tusculum Board of Trustees, and Joe Woody of the U.S. Department of Agriculture.

Ground was broken on the facility in fall of 2013, and on Jan. 10, 2017, the first classes were held in the new center. The opening of the Meen Center for Science and Math has created a strong sense of excitement on campus, particularly for the students, faculty and staff who were the first to experience this state-of-the-art facility.

Interiors include wings for biology, chemistry, mathematics, computer science, environmental science, and two wings for nursing programs. There are laboratory spaces and research areas for both faculty and students. The ground floor features the environmental science wing with a loading dock, as well as large general classroom spaces and classrooms equipped for distance learning programs. A large lecture hall is included on the ground floor.

The facility was been made possible in part to the late Verna June Meen, whose $3.875 million gift towards funding the facility in memory of her husband, Dr. Ronald H. Meen, allowed the leadership of the college to move forward with plans for the facility. Additionally, the college just completed a $26 million capital campaign and was assisted by a $4.7 million low-interest loan from USDA. Much of the technology and equipment in the facility was purchased through a $381,000 grant from the Appalachian Regional Commission.

The Meen Center will impact students in the areas of math, science, computer science, biology, chemistry, environmental science and nursing for generations. Verna June and Ron Meen’s legacy will live in perpetuity through the lives of the countless number of people who pass through these doors, graduate and serve communities throughout the United States and the world. 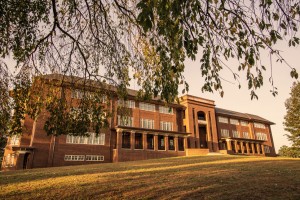