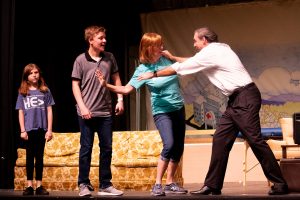 This delightful and whimsical musical follows the adventures of Matilda, an extraordinarily brilliant little girl who astounds everyone, including herself, with her magical abilities. Scorned by her incredibly insensitive family, she tries to correct every injustice she encounters – and handles the task quite well.

“This is a show for the whole family, as it proves right over wrong, provides laughter and, maybe, tears and promotes books over the ‘tele,’” said Marilyn DuBrisk, Tusculum’s artist-in-residence, who directs the show. “Our talented ensemble and expert behind-the-scenes crew will continue our tradition of excellence with a joyful musical that will thoroughly entertain our audiences.”

The musical is based on the 1988 book “Matilda” by Dahl and the 1996 movie with the same name. “Matilda the Musical,” with book by Dennis Kelly and music and lyrics by Tim Minchin, premiered on London’s West End in 2011. It came to Broadway in the United States in 2013 and won five Tony Awards that year. 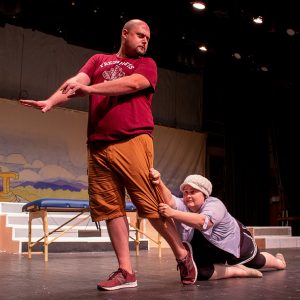 Brian Ricker as Miss Trunchbull and Faith Rader as Miss Honey perform a scene in “Matilda the Musical.”

Members of the Tiny Tots group and Matilda pose on the Tusculum University grounds wearing costumes for “Matilda the Musical.”

Supporting actors include Margo Olmsted as the librarian, Mrs. Phelps; Josh Beddingfield as the doctor; and Daniel Shrader as Sergei the Russian.

Tickets are $15 for anyone older than 12, $12 for those 60 and older and $5 for children 12 and younger and are payable by cash or check. They may be reserved by calling Tusclum Arts Outreach at 423-798-1620 or emailing jhollowell@tusculum.edu. People can pick up and pay for tickets at the box office the day of the performance or schedule a time to come by the Arts Outreach office.