GREENEVILLE – Two distinguished members of the Tusculum University family have earned recognition from the Alumni Association for their efforts to advance the higher education institution. 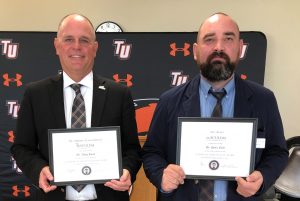 Doug Jones, vice president for athletics and university initiatives, collected the National Alumni Recognition Award during the annual Alumni Association meeting Saturday, Oct. 5, on the Greeneville campus. Joining him as an honoree was Dr. Peter Noll, an associate professor of public history and museum studies, who received the National Living Faculty Award.

The two awards recognize individuals who have made outstanding contributions to the university and its academic programs.

Jones, a Tusculum family member since 1997, is best known for his 21 years as the head baseball coach. During his remarkable run, he amassed a 705-412-1 record, which included five South Atlantic Conference championships, four SAC tournament titles and seven trips to the NCAA Division II Tournament. He has served as director of athletics since 2015 and has guided the department to additional success on and off the field while expanding the university’s offerings to 24 intercollegiate sports.

“This is a tremendous honor, and I’m grateful,” Jones said. “You’re only as good as the people you surround yourself with, and during my time as head baseball coach, I had a lot of terrific assistant coaches and great student-athletes. And in my new role, it’s the same formula – surround yourself with people a lot smarter than you and get a lot of things accomplished.”

Dr. Noll, a highly respected source for Tusculum’s history, joined the faculty in 2011 and has taught a broad spectrum of courses. He oversaw the work of students who created a Tusculum 225 exhibit that received an award of excellence from the Tennessee Association of Museums earlier this year. Dr. Noll has further demonstrated leadership by serving as faculty chair since 2018 and as chairman of the faculty council.

“This award means a lot coming from the alumni because I appreciate what Tusculum means to the alumni and what the alumni have done for this institution,” Noll said. “I am fortunate to work at a university that is replete with history and has served the region so capably for 225 years.”