GREENEVILLE – Two artists with ties to Tusculum University will show their portraits and illustrations during a special exhibit from 5-7 p.m. Thursday, Oct. 17, in the Clem Allison Gallery on the Greeneville campus. 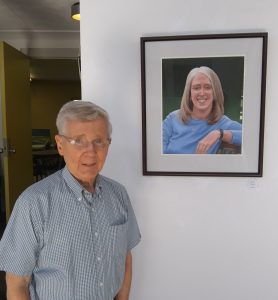 Clem Allison stands in the gallery with one of his portraits for Thursday’s show.

Allison, who served as director of the division of arts and humanities at Tusculum before his retirement in 1996, will present portraits he has created in the last 40-plus years. Bill Bledsoe, who is program coordinator for the art department, will display illustrations he has developed for his upcoming book about the university’s 225th anniversary.

Bledsoe’s product will be used in his upcoming book “Tusculum: Home of the Tennessee Pioneer,” which is an illustrative history of Tennessee’s first higher education institution. He has created more than 20 images that show Tusculum’s distinction in the past, present and future.

“It was my intent for the illustrations and accompanying text to bring life to the history of Tusculum,” Bledsoe said. “Photographs and historical notes are customary to chronicle such history, but artwork dovetailed with poetry, speeches, sermons and letters can give added dimension to the complexion and context of Tusculum University in a manner that I hope is meaningful and lasting.”

His book discusses Cicero, Martin Luther’s 95 Theses, John Knox and the Presbyterian Reformation, Princeton University, Samuel Doak’s travel through East Tennessee and the establishment of Greeneville College, which later evolved into Tusculum. Other topics for the book include the inspiration for the university’s nickname (Pioneer), school history paralleling events of national importance and the vision of Tusculum for the future. 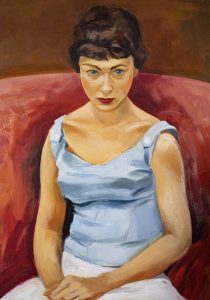 Clem Allison created this portrait of his wife, Bev.

Portraits from Allison include an oil painting of his late wife, Bev; a charcoal drawing; and a pastel called “Girl Before a Window.” He made all of these more than 40 years ago and then concentrated on other forms of art until early 2019, when First Presbyterian Church in Greeneville asked him to produce a portrait of Hezekiah Balch. Balch founded Greeneville College and was the first settled pastor of First Presbyterian. 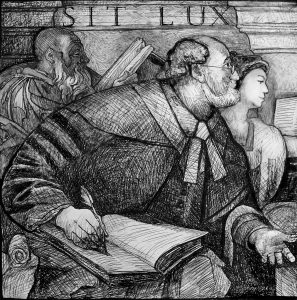 This illustration, called “The Scholar,” shows scholars at work at Tusculum as pioneers in education. 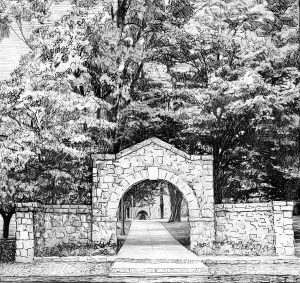 Bill Bledsoe created this illustration of the Tusculum Arch.

His interest in this art style renewed, Allison proceeded to complete portraits of friends Wess DuBrisk, Jim Mays and Sally Causey as well as the daughters of Meme and William Exum of Greeneville. All but the Balch portrait were based on photographs.

“While working from photos may seem to some to be an easy task compared to painting a live model, there are challenges in both cases,” Allison said. “Producing a three-dimensional illusion from one or more two-dimensional photo images can result in a rather lifeless painting if some intuition and imagination are not called upon. Likewise, when painting from life, one cannot expect the sitter to remain still indefinitely – particularly children.”

Admission to the exhibit is free, and no reservations are required.