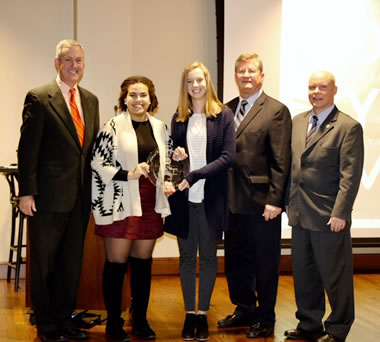 Facing a lecture hall full of Tusculum University students, Tre Hargett, Tennessee’s secretary of state, told them that someday one of them might be governor, a U.S. senator or the nation’s president.

If that is going to happen, he said, it is important they prepare themselves for this opportunity and participate in the electoral process. He encouraged students to not only register to vote but then to go to the polls and cast votes that reflect their views.

Hargett was at Tusculum’s Meen Center Thursday, Jan. 24, to recognize the university as one of three winners in the 2018 Tennessee College Voter Registration Competition. He presented an award to Hanna Johnson and Carmyn Tassone, two sophomores who led a voter registration drive in the fall. Joining them for the presentation were state Sen. Steve Southerland, R-Morristown, and state Rep. David Hawk, R-Greeneville, who represent Tusculum in the state Legislature.

Hargett said he was not surprised Tusculum won in the private school category because of its previous involvement in registration drives.

This year, Johnson and Tassone set up tables for two days in the Scott M. Niswonger Commons to help students register to vote. They also conducted a voting activity where they asked students what foreign language class they would like to see on campus. Helping the students with their activities was Dr. Mary Cooper, an assistant professor of political science and director of the honors program at Tusculum.

“It’s important to vote, and it’s vital that our generation knows that it’s important,” Johnson said. “This is really our voice in society. If we don’t act on it, then nothing will ever change and we won’t have our voices heard. I feel like it’s a duty as a citizen, but it’s also a right that we have and we’re very privileged to be able to have that right.”

Tassone and Johnson put special emphasis on recruiting freshmen to register because these students did not have an opportunity to participate in the previous year’s drive, but they also sought students in more advanced years at Tusculum. In addition, they visited a few first-year experience classes.

“It’s very important to have every single voice heard,” Tassone said. “That one vote can be a change in anybody’s life, so I feel that it’s very important for everybody to have their own voice because it really can make a change – maybe not in your life but in others’ lives. And that’s why I find it’s so important.”