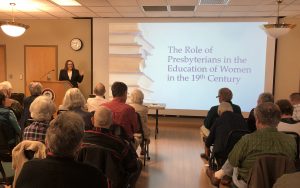 Dollie Boyd, Tusculum University’s director of museums, spoke during her presentation about the progress and challenges women faced with education.

GREENEVILLE – Women’s role in society and their access to the same opportunities as men have evolved throughout history, including with one of the most fundamental tools for advancement – education.

Dollie Boyd, Tusculum University’s director of museums, traced the achievements women have made through education as she delivered the final presentation of the Theologian-In-Residence series for 2019. She discussed various attitudes women have faced and paid particular attention to one religious denomination’s approach in a lecture titled “The Role of Presbyterians in the Education of Women in the 19th Century.”

Boyd also highlighted some ways women demonstrated strength to pave additional paths of progress for that gender. However, she said women continued to experience challenges.

“Women who sought education in the 19th Century ran up against thousands of years of negative opinion regarding whether it was wise, necessary or even safe to educate them,” Boyd told the audience in the Chalmers Conference Center of the Scott M. Niswonger Commons. “From ancient Greece and Rome forward, male pundits frequently equated educating women to releasing some form of evil upon the world.”

Providing historical context, Boyd noted some women were able to secure advanced education in the Middle Ages through a religious order. But she said unfavorable attitudes about educated women generally survived the fall of Rome. The Renaissance period was not much better, and it was not until the Reformation that women saw a significant change in people’s approach toward them, she said.

“Martin Luther held conventional ideas of womanhood, but that did not keep him from advocating for compulsory school attendance for boys and girls, with the girls studying a curriculum that included religion, history, classical and modern languages, literature, music and mathematics,” Boyd said. “After the Reformation, schools for girls and compulsory education saw slow, but steady, progress in Europe.”

Protestants who subsequently settled in the colonies held some of these progressive views about education, and some girls obtained an education in the years leading to the American Revolution from dame schools, which were an informal type of home schooling, Boyd said. She said wealthy girls in the southern colonies received tutoring or attended finishing school, but no colleges or universities were available to women before the Revolution. There were some female seminaries and academies that were designed to produce genteel, marriageable ladies, she said.

Boyd said Dr. Benjamin Rush, a co-founder of The Young Ladies’ Academy in Philadelphia, contended women needed formal education for their children’s sake and for the facilitation of the new country’s business. Some graduates of the academy took uncompromisingly bold stances, she said.

For example, Ann Negus did not view marriage highly because most women would have to let go of their liberty to men who would show hatred and contempt in return. Another woman, Priscilla Mason, spoke in support of a woman’s right to speak in public and criticized male bigotry and misogyny in her graduation address.

“In the aftermath of the Revolution, the wealthy of the new nation sent their daughters to finishing schools and female seminaries, some of which evolved into the first colleges for women,” Boyd said. “Historian Mary Beth Norton contends that prior to the American Revolution the colonists viewed women’s education as a novelty, but in the new nation, families began to think of educating their sons and daughters as an obligation.”

A few years after Oberlin opened, a group of men and women who thought alike gathered in Seneca Falls, New York, for a convention that launched the women’s suffrage movement, Boyd said. They crafted a document called the “Declaration of Sentiments” that noted challenges women faced, including the exclusion of women from some lucrative professions and restrictions against them speaking publicly.

For example, young male students had multiple opportunities to develop their public speaking, rhetoric and argumentation skills, and they were able to read their own essays or orations at Oberlin’s graduation in 1841. However, a male minister read the selections for the women.

By the 1850s, several Presbyterian-affiliated schools admitted women solely or along with men, Boyd said. In addition, the Civil War also provided opportunities for women to run farms, businesses, plantations and schools with so many men serving in the military. After the Civil War, more educational opportunities became available for women, with Maryville College admitting them in 1867 and Tusculum following suit in 1875.

“As the century wore on, it became clear that women had stormed the gates of higher education and were not retreating any time soon,” Boyd said. “Nevertheless, debates about the usefulness, wisdom and methods to be employed in female education raged on. At Macalester College, a Presbyterian school founded in St. Paul, Minnesota, in 1874, the organizers debated how to provide a good education to women that would make them fit Christian wives without spoiling them with radical ideas and longing for mannish occupations.”

The Presbyterian Church addressed the financial need and neglect of Presbyterian schools that occurred during the Civil War by creating a Board of Aid for Colleges and Academies in 1883, Boyd said. Nettie Fowler McCormick, a major benefactor for Tusculum, made donations to the university through that board as she waited for her late husband’s estate to be settled. Other women supported Presbyterian-led education with financial contributions as well.

Boyd said the number of women attending college skyrocketed from more than 3,000 to nearly 20,000 in the last quarter of the 19th Century. The first woman to attend Tusculum as a regularly admitted student was Julia Doak, granddaughter of Samuel Doak, the founder of Tusculum Academy, and the daughter of William Doak, who served as president of the academy and Tusculum College.

A committee of women raised $1,000 to refurbish the first building established on campus, often called the Old College and now the President Andrew Johnson Museum and Library in 1891, to serve as a women’s dormitory.

“At the turn of the 20th Century, McCormick money financed a dormitory for women on campus,” Boyd said. “When Virginia Hall opened in 1902, women got arguably the nicest new building on campus, if not in all of Greene County. Virginia contained a girl’s gymnasium, parlors and reception rooms, which no doubt increased social and networking opportunities. Mrs. McCormick herself oversaw every detail of the building, from paint color to room furniture. Women were now as fully integrated into college life at Tusculum as the times would allow.”

The number of women who enrolled at Tusculum had grown by more than 1,000 percent in the span of 20 years. Women who attended Tusculum and other, similar Presbyterian schools embraced college life by starting their own debate societies and other organizations. Tusculum female students created the Clionian and Alethean literary and debate societies, and they teamed with their male counterparts after 1902 to conduct joint programs.

In addition to attending colleges and universities, women were also teaching courses. Boyd said Maryville College employed at least one female teacher in 1873 and a total of 11 between 1883 and 1914. Tusculum featured Louise Morey, who taught modern languages and English in early 1890s, and another woman, Ethelwyn Rea, a professor of music who studied at Boston University, was on the faculty rolls for the 1897-98 academic year. More women would join the faculty and staff in the early 1900s. At Maryville and Tusculum, female teachers earned less than males, Boyd said.

“After the turn of the century, women at Tusculum made other significant steps in their coeducational journey,” Boyd said. “They formed a tennis team in 1902 and a Glee Club in 1907. In the first decade, campus was alive with coed fun like dances, dorm parties and mountain day. Women and men competed in intercollegiate debates with their rivals at Maryville and Carson-Newman and worked side by side on campus publications.

“The debate about how, when, why and where women should be educated wore on for many more years, but it is clear that by this time, women were on campus to stay.”