NEW YORK – Five graduates of the Tusculum University nursing program are stepping forward to help ease the crunch experienced by hospitals in New York due to the coronavirus. 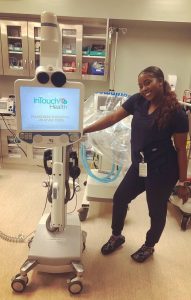 Calyn Kelly poses at a hospital in Georgia. 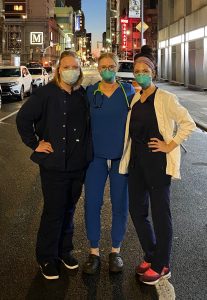 Ansley Guerrero, Lynsey Hughes and Madi Wesley flew to the nation’s largest city Monday, April 13, and were waiting on their first assignments. They joined Calyn Kelly, who has been serving in New York for about two weeks, and Brianna Stine, who has been in the city for about a week.

“We are extremely proud of these professionals, who have taken their calling seriously and are showing their support for their fellow nurses and their dedication to the health and well-being of patients,” said Dr. Lori Anderson, dean of Tusculum’s School of Nursing. “They are embodying the principle of civic engagement, and we commend them for embracing the opportunity to help others during such a challenging period.”

These Tusculum graduates are working through Krucial Staffing, a national organization that supplies clinical and nonclinical staff to locations requiring urgent assistance. They responded to a call seeking 400 registered nurses in New York and were among 10,000 who applied. The group will work 21 days straight and then have the option of taking off a few days and working another 21 days.

Guerrero and Wesley graduated from Tusculum in 2018, Kelly and Stine received their degrees in 2017 and Hughes completed her degree in 2016. They all earned a Bachelor of Science in nursing.

The coronavirus has hit New York especially hard, and the numbers have stretched human and equipment resources. Wesley heard about the opportunity to serve in New York from Kelly and Stine and followed up by reaching out to Krucial.

“We want to be part of the front line and help patients and our fellow medical professionals right now,” said Guerrero, who has worked in an intensive care unit at Ballad Health. “That’s what we’re trained to do. I will bust my butt for 21 days and help as much as I can. We’re very team-oriented and felt it was important to come at a time of need.” 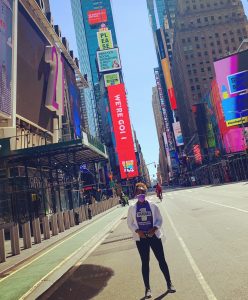 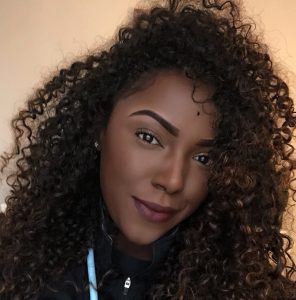 This is a photo of Brianna Stine.

Kelly has worked throughout her career in the emergency department at hospitals, most recently in Maryland before arriving in New York Tuesday, March 31. Because she has worked in that aspect of health care, she is accustomed to serving on the front lines of illnesses. Her thinking was, “Why not do that with the coronavirus?”

As one might expect, she has experienced tough times, such as treating patients with the coronavirus and seeing some who have died. However, she has a servant’s approach to her decision.

“Why not do something to help the country?” Kelly said. “Part of my personality is to pick the places that are experiencing the biggest challenges. I know New York needed a lot of help. By coming here, it will be a good experience to say I did it and made it through.”

The biggest adjustment for Kelly has been the pace as well as the scale of what her hospital is facing. While emergency departments are frequently a busy place, the hospital where she is working is twice as hectic compared to the speed to which she is accustomed. Fortunately, she said the last few days have been a little better.

Stine is also an emergency department nurse who is currently working in Nashville but had no shifts scheduled for April. She had planned vacations, but those were canceled due to the coronavirus, freeing her to head to New York. She has provided care for coronavirus patients and is working in a COVID-19 unit.

She began her duties Monday, April 6.

“New York is in desperate need for additional nurses because of the volume of patients,” Stine said. “I felt I needed to be here to help. I was off all month, so why not help others in need? The reason I got into nursing was to help others. I am definitely glad I did this. I am helping a lot of patients and have met a lot of great nurses.”

When Guerrero called Hughes, a former co-worker, and said they should participate in providing care in New York, Hughes said she jumped at the opportunity. Hughes has been serving as a travel nurse, a professional who serves short stints as a fill-in at medical facilities, and most recently worked in Knoxville.

“I hope to give some of their nurses a measure of relief,” Hughes said. “You read and hear about how the medical professionals there are drained, and I hope to make a small impact on them during the next three weeks.”

Wesley, who is originally from Minnesota, was most recently working as a travel nurse in Florida. She said she chose to come to New York because of the uniqueness of this medical crisis.

“I would be lying if I said I wasn’t nervous, but this is a once-in-a-lifetime professional opportunity to help during such a critical period,” she said. “New York is struggling, and it is asking for help. I don’t know what to expect, but I hope we can help out.”

Reflecting on their years at Tusculum, the nurses said the university prepared them for this experience. Kelly said the school of nursing instilled a work ethic in her and pushed her to be the best, and Hughes and Wesley said Tusculum provided them with the foundation for their careers. Hughes said her nursing training at Tusculum still guides her as she makes decisions in her career.

“We thank these nurses for demonstrating a strong commitment to the betterment of their fellow human beings,” said Dr. Scott Hummel, Tusculum’s president. “Using their skills to fight the coronavirus, these graduates are performing an admirable service. We are grateful for their selfless approach to their profession.”

As these women serve during the pandemic, Kelly still had time as she finished her lunch break for a basic reminder for those in communities across the nation.

“Stay at home, everybody, and be safe,” she said.