GREENEVILLE – When Margaret Gaut died in 2019, Tusculum University mourned the loss of this beloved alumna but remained inspired by her charm, grace and love for Tennessee’s first higher education institution. 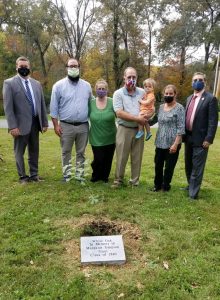 The affection and esteem the university holds for Gaut, a 1940 graduate, is still evident and served as the basis for a ceremony Monday, Oct. 26, on the Greeneville campus. Her son, Bill, and daughter-in-law, Ann, planted a sapling adjacent to the Old College, one of the most historic buildings on the grounds. It was accompanied by a stone donated by Justin Jeffers, manager of Jeffers Funeral and Cremation Service in Greeneville and Afton and a 2004 Tusculum alumnus.

In a further commemoration of Tusculum’s rich history and Margaret’s connection to it, the new tree originated from acorns collected from the nearby Old Oak Tree, which is estimated to be more than 300 years old. She helped collect the acorns.

“Margaret passed away when she was 100 years old, but she will live forever in our hearts,” said Kim Kidwell, managing director of Tusculum’s Office of Institutional Advancement. “We celebrate Margaret in a way that would be most pleasing to her by planting a tree in her loving memory on the Tusculum campus.”

Bill said the outcome of Monday’s event would have meant a lot to his mother.

“She would have just been thrilled and honored to have known it would take place,” Bill said. “She had been so meticulous in trying to get the saplings growing from the acorns of the Old Oak. She would just be ecstatic with the result. It’s also an honor for us to remember where this and other saplings came from and to know the university wanted to put one on the campus in her honor. It is a privilege to know the college still remembers her.”

Dr. Scott Hummel, Tusculum’s president, provided an opening and closing prayer in which he thanked God for the gift of Margaret’s life and for the way she led her life. In additional remarks, he quoted from Psalm 1:2-3 NIV, “But whose delight is in the law of the Lord, and who meditates on his law day and night. That person is like a tree planted by streams of water, which yields its fruit in season and whose leaf does not wither – whatever they do prospers.”

He noted that universities can produce fruits in the academic and social lives of their students and in the lives of their alumni. Reflecting on Margaret, he said she bore fruits for Tusculum through her dedication, strength and deep roots at the university.

“I will remember Margaret every time I walk by this tree,” Dr. Hummel said. “This new tree represents the bright future for our university, and as we head into the next 226 years at Tusculum, it will provide protection and strength for our faculty, staff and students.”

Nicole Rader, development officer and director of special events at Tusculum, has worked closely with Gaut family members and presented them with additional saplings created from the acorns. 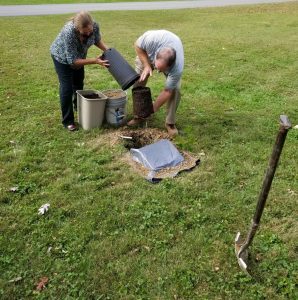 “Margaret was a terrific lady, and we miss her greatly,” Rader said. “It was a pleasure to experience the positive influence she had on our university. With the tree we have planted, we will have another reason to think of her and her family fondly.”

After graduating from Tusculum with a Bachelor of Science in home economics, Margaret served as Alumni Association president and, even in her later years, was a member of the Alumni Executive Board. She also assisted her alma mater by sitting on a presidential search committee and the External Relations Committee of the Board of Trustees.

Tusculum recognized her contributions by bestowing on her the Pioneer Award, the Alumni Association’s highest honor, in 2001 and the Distinguished Service Award in 2015. Tusculum also presented her with the first diploma bearing Tusculum’s name as a university.

“She was Tusculum University to the core, growing up next to it, attending the institution and staying active with it after graduation,” Bill said. “Horticulture and the college were about her pride and joys.”