GREENEVILLE – As Tusculum University celebrated the accomplishments of its spring graduates, the higher education institution also paid tribute to a longtime community servant with the awarding of an honorary doctorate. 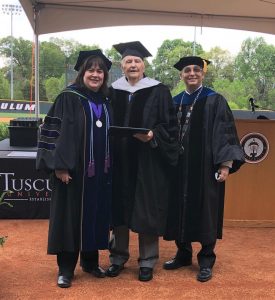 Dr. Scott Hummel, Tusculum’s president, right, and Dr. Tricia Hunsader, provost and vice president of academic affairs, left, celebrate with the Rev. Charles Hutchins the awarding by the university of an Honorary Doctor of Humane Letters to the longtime community servant.

Dr. Scott Hummel, Tusculum’s president, awarded an Honorary Doctor of Humane Letters to the Rev. Charles Hutchins, director of church relations and estate planning at Holston United Methodist Home for Children, during the 10 a.m. graduation ceremony in Pioneer Park. The honor was a surprise to the beloved member of the Greene County community, who had been invited to the graduation to deliver the invocation.

Moving forward, Tusculum will refer to him as Dr. Hutchins in addition to his title as a minister.

“Dr. Hutchins is an outstanding individual who has transformed children’s lives and inspired the region with his commitment on their behalf,” Dr. Hummel said. “His enrichment of personal lives, his civic engagement and his provision of a caring Christian environment for children exemplify our mission statement. We are delighted to recognize his relentless support of youth with this honorary doctorate and encourage others to follow his example.”

Kim Kidwell, associate vice president of institutional advancement, nominated Dr. Hutchins, a minister in the United Methodist Church, for the honorary doctorate. One of the many ways she said Dr. Hutchins has impacted the community is his placement of more than 8,000 children in adoption.

She also noted he founded the Greeneville Mental Health Association – now Nolichucky Mental Health – facility, which provides outpatient mental health, substance abuse and co-occurring programs for children, adolescents and adults. Kidwell also cited Dr. Hutchins’ service with the Town of Greeneville’s Regional Planning Commission and Board of Zoning Appeals and the Greene County Partnership’s Greene Coat Ambassador program. He is a deacon in the Holston Conference of the United Methodist Church.

Dr. Hutchins has received the Bronze Star and the Purple Heart as a result of his military service and a Lifetime Legacy Award from Holston Home for Children. The Hutchins History House at Holston United Methodist Home for Children was named in honor of him and his wife, Eva Gray. 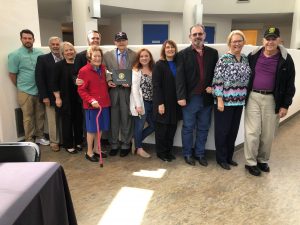 Dr. Charles Hutchins, sixth from the left, celebrates his receipt of an Honorary Doctor of Humane Letters from Tusculum University with his family.

“It is my distinct honor and privilege to nominate Dr. Hutchins for an Honorary Doctor of Humane Letters designation at Tusculum University,” Kidwell said. “He has achieved much in his personal and professional life during his longtime and faithful service to our Tusculum and East Tennessee communities.”

The Tusculum Board of Trustees awards honorary degrees based on the recommendation of its Academic Affairs Committee and the Honorary Degree Subcommittee. The board takes into account character, personality, personal effectiveness and standing and requires the person to have had a distinguished career in a vocation or field and/or have provided exceptional service to Tusculum or the community.

Dr. Hutchins said he was grateful to Tusculum for bestowing the honorary doctorate on him.

“I’ve had a lot of honors in my life, and this is the greatest,” Dr. Hutchins said. “I never would have dreamed such a thing would happen. I’m so happy to be an alumnus now of Tusculum University. I love Tusculum and what it does for Greeneville and the United States. It’s a great school.”