GREENEVILLE – A scholarly article about salamanders in Greene County that was written by a 2020 Tusculum University alumnus and a professor who mentored him was recently published in a journal for their profession. 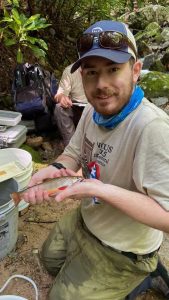 Levi Morgan, a 2020 graduate of Tusculum University, wrote with Dr. Conor Keitzer, assistant professor of natural sciences at Tusculum, a seven-page article on salamanders that appeared in Volume 4 of The Tennessee Journal of Herpetology.

Levi Morgan, a 2020 graduate who earned a Bachelor of Science in environmental science, and Dr. Conor Keitzer, assistant professor of natural sciences at Tusculum, wrote the seven-page article that appeared in Volume 4 of The Tennessee Journal of Herpetology.

The article was titled “Survey of Woodland Salamanders in Southern Greene County, Tennessee.” Dr. Keitzer said Morgan was the lead author about research he and other Tusculum students performed.

“Salamanders in Northeast Tennessee face a number of potential threats, including climate and land use change,” Morgan and Dr. Keitzer said in the abstract. “However, the current status and distribution of species in much of this area, which is important fundamental information for effective species management, are not well documented in the literature or public data sources.”

They said Tusculum researchers conducted salamander transect surveys from May 2017-October 2019 across 70 transects in the Cherokee National Forest of southern Greene County to help increase knowledge of salamander species in this area. The researchers observed 11 different species of salamanders and documented an additional 10 species of herpetofauna.

“From a standpoint of conservation planning, we found that higher elevation locations (greater than 700 meters) were more diverse, highlighting the need for protection of high elevation forested ecosystems, which harbor much of the salamander diversity found in the southern Appalachian Mountains,” Morgan and Dr. Keitzer said.

Morgan said the publication meant a lot to him and Dr. Keitzer. They worked on the article during the spring 2020 semester, which was Morgan’s last at Tusculum before graduating. He said the article served as a nice way to end a wonderful chapter at Tusculum in his educational journey. Morgan is now studying for a Master of Wildlife and Fisheries Resources degree at Clemson University.

Dr. Keitzer said the research and article on which Morgan worked was a great example of what students can achieve at Tusculum. 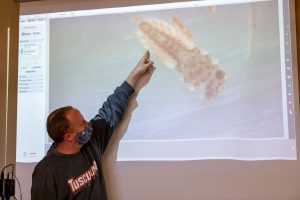 Dr. Conor Keitzer teaches in one of his classes at Tusculum University.

“We are proud to provide our students with an active and experiential education that equips them to be career-ready professionals,” Dr. Keitzer said. “Participating in this research initiative provided Levi with skills that will serve him well in his graduate studies and in his career. He also enabled readers to clearly understand the quality of Tusculum’s environmental science program.”

The article is available at https://bit.ly/2RINBp8 and begins on Page 14. To learn more about the university, please visit www.tusculum.edu.