GREENEVILLE – Community members who enjoy a short story version of theater will experience diverse offerings in an upcoming series of performances at Tusculum University.

Tusculum Arts Outreach and the university’s English and Fine Arts Department will conduct the “5X10 Plays” starting Friday, April 16, and continuing for six additional dates. Each day, actors will perform five plays in the Annie Hogan Byrd Fine Arts Center Theatre that last 10 minutes each. Following the completion of all five plays, except on closing night, Tusculum will hold a question-and-answer session with various members of the production.

“The ‘5X10 Plays’ are a beloved tradition at Tusculum because they provide a forum to showcase the considerable writing talent of our students,” said Wayne Thomas, dean of the College of Civic and Liberal Arts. “They are also a great way for the community to see high-quality theater performed in a more condensed format that is still highly entertaining. The opportunity to present multiple genres on stage in one event is exciting because the audience is able to absorb the richness of our theater and writing programs.”

Tusculum holds the “5X10 Plays” every other year, and the university’s students typically write all of them. This year, the university has opened the event to a professional playwright and a local middle school student.

Here are the plays. 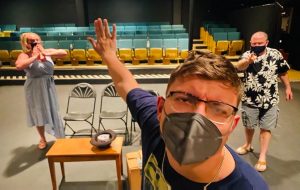 Left to right, Lena Kendrick Dean, Simon Pate and Josh Beddingfield rehearse a scene in “Outside of Eden.”

Barton, Marshall and Robertsen are Tusculum students, and Sam is a 13-year-old seventh grader at Chuckey-Doak Middle School. Zipperer is a teacher and playwright who is widely published and produced across North America. She also served as judge of this year’s Curtis and Billie Owens Literary Awards, a celebration of excellence in creative writing by Tusculum students.

Performers will be Tusculum students and community members.

Participants in the question-and-sessions afterward will be:

Tickets are general admission and cost $10. Seating is limited to 100 for each performance because of the global coronavirus pandemic. Guests must wear a face covering and observe physical distancing, and Arts Outreach personnel will conduct temperature checks.

Reservations are encouraged by emailing Jennifer Hollowell, coordinator of Arts Outreach, at jhollowell@tusculum.edu or calling 423-798-1620. Payment is by check or cash only. Tickets are also available at the Annie Hogan Byrd box office an hour before the show.