NASHVILLE – Dr. Larry Brotherton, an alumnus, longtime benefactor and member of the Board of Trustees of Tusculum University, has been honored for his impressive career with his selection to the Tennessee Independent Colleges and Universities Association Hall of Fame. 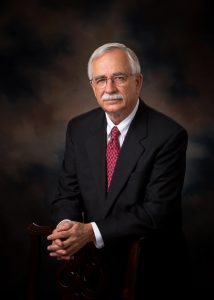 He is a member of the 2021 Hall of Fame class along with 23 others from member institutions across the state, including legendary singer Pat Boone. The recognition comes to a businessman who has achieved tremendous success in his professional, philanthropic and civic endeavors.

“We are thrilled Dr. Brotherton has received this well-deserved honor because it demonstrates not only his business acumen but also the way he graciously accepts the opportunity and responsibility to improve lives,” said Dr. Scott Hummel, Tusculum’s president. “Dr. Brotherton has played a vital role in supporting initiatives at his alma mater that have helped our students attain their career aspirations. We are extremely proud that he has used his Tusculum degree to make his mark on the world and set a powerful example for our students.”

Tusculum will celebrate Dr. Brotherton’s selection at an upcoming Board of Trustees meeting.

Dr. Brotherton is a Greene County native who graduated from Tusculum in 1970 with a bachelor’s degree in chemistry. He subsequently earned a doctorate in chemistry from the University of Tennessee.

He also assisted his profession, serving as chairman of the Society of Chemical Manufacturers and Affiliates’ Board of Governors in 2009. He holds several U.S. patents and has received numerous chemical performance awards.

Dr. Brotherton was elected to the Tusculum Board of Trustees in 1995. He serves on the Executive Committee as well as the Institutional Advancement and Branding Committee and the Finance and Operations Committee.

He has been a generous donor to multiple causes at Tusculum, including the Thomas J. Garland Library, the music program and the chemistry program. He spearheaded the creation of the Providing for Our Pioneers scholarship, which supports students from Greeneville and Greene County who have financial need.

When he committed to financially supporting the renovation and expansion of the library, he discussed the value of his Tusculum education.

“For me personally, Tusculum was the doorway to an education that helped me develop a vision for my life,” he said. “The sound liberal arts education I received while attending Tusculum laid the foundation for an advanced degree in chemistry, as well as developing my awareness of other important areas, such as music and art.”

In 2008, Dr. Brotherton received the Distinguished Service Award from his alma mater. Eight year later, he earned the Pioneer Award, which is presented to an outstanding alum in recognition of outstanding or meritorious achievement in that person’s chosen field; for distinguished service to church, community, country and humanity; and for continuing and loyal service to Tusculum. He earned the Ambassador for Economic Development Award in South Carolina, where he lives and works, in 2014.

During the Opening Convocation in 2019 at Tusculum, Dr. Brotherton further reflected on the impact Tusculum had on his life.

“Once I arrived at Tusculum, I could start to see the opportunities that lay before me, and I would make a plan that I thought could be successful,” he said. “Over the years, the plan in my mind codified to be like this: The Pioneer Way is changing aspirations into visions, changing visions into degrees and changing degrees into life adventures. That’s what Tusculum has meant to me and why I am so pleased to be a graduate.”

Dr. Greg Nelson, chairman of Tusculum’s Board of Trustees, welcomed the selection of Dr. Brotherton to the Hall of Fame.

“Dr. Brotherton is an outstanding board member whose love of Tusculum is evident in every decision he makes for the university,” Dr. Nelson said. “His strong leadership, his commitment to the university’s growth and strength through his financial gifts and, most importantly, his time and direct engagement are impressive. We thank TICUA for choosing him for this prestigious honor. We are fortunate he chose his hometown university for a degree and have been blessed to have him in our midst ever since as one of our most prominent alumni.”