GREENEVILLE – One of the highlights of spring commencement at Tusculum University is the opportunity for alumni to return to the Greeneville campus 50 years after they graduated and relive the experience. 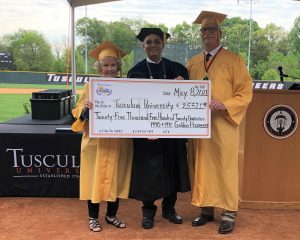 Dr. Scott Hummel, center, receives the check from the Golden Pioneers. Standing with him are, right, the Rev. Woody Meredith and Dr. Carolyn Howard Ham.

They are known as Golden Pioneers, and in a continuation of this tradition, the group walked during the ceremony Saturday, May 8, with the students who were graduating this year. The Golden Pioneers took this special moment a step further, though, expressing appreciation for the education they received from Tusculum by establishing an endowed scholarship.

The Rev. Woody Meredith, Class of 1971, and Dr. Carolyn Howard Ham, Class of 1970, presented Dr. Scott Hummel, Tusculum’s president, with a check for $25,521 to create the endowment. The two classes donated the money to their alma mater in memory of classmates who have passed away.

“Today, we walk through the Tusculum Arch older, and hopefully wiser, and as we reflect on our lives, we have made a difference in the areas of education, science, medicine, business, the arts and the church, just to name a few,” Meredith said. “We’ve taken the education Tusculum provided, and we’ve done our best to touch and change lives.

“But we’re not finished yet. Now we have a dream, not for ourselves but for the future generations of Tusculum students. It is our dream that this scholarship will give deserving students the opportunity to not only study at Tusculum but also allow them to realize their dreams, to make a difference and to one day join us as Golden Pioneers.”

Normally, the spring graduation would feature just one class with a 50th anniversary, but Tusculum did not have an in-person ceremony in 2020 due to the global coronavirus pandemic. With the return of a graduation ceremony on campus this year, a total of 19 alumni from the 1970 and 1971 classes participated in the ceremonies.

Dr. Hummel is grateful for the support from these two classes.

“The value of a Tusculum education was clearly evident when I visited with these alumni and heard their stories about their student years and their lives since they graduated,” Dr. Hummel said. “They enjoyed an excellent education in part because of the financial support of alumni who preceded them and other donors. We are thankful the classes of ’70 and ‘71 have returned the favor with their generous support of future Tusculum students and encourage today’s graduates to follow in the philanthropic footsteps of these Golden Pioneers.”

During their return to Tusculum, the Golden Pioneers received a campus tour and medallions in recognition of their special status. They also reviewed their student record, which includes items such as their application materials, letters of recommendation and grade reports. Their record is housed in the university archives.

Dr. Peter Noll, associate professor of public history and museum studies, who retrieved the records, said this look back at these documents has become one of the traditions for the Golden Pioneers in recent years.

“I think they enjoy it,” Dr. Noll said of those who have reviewed their records. “They get to see a picture of themselves in a historical snapshot.”

Elvira Viggiano Delaplane, a member of the Class of ’70, earned a bachelor’s degree in sociology and worked in the Tusculum cafeteria. She returned to Tusculum for the first time since 1995.

“College was one of those really memorable moments in my life,” she said. “When I came, I can honestly say I didn’t feel very much like a person who could do what I accomplished in college. When I came to Tusculum, I worked really hard, and I was able to succeed and graduate, which to me was one of the biggest achievements. I also became extremely close to a number of college students. Our class was a family and still is. This school means so much to me because it connected me not only with others but also with my Lord, and I was very taken by that.”

Dr. Ham met her husband E.J. when they were students at Tusculum and have now been married for 48 years. The couple were last on campus 15 years ago. Reflecting on his experience, E.J. had similar thoughts to Delaplane about the closeness of everyone at Tusculum.

“Everybody knew everybody, and we got along,” said E.J., who graduated in 1970. “Everybody helped each other out if they needed to go somewhere to get something. The professors were very easy to get to know.”

As they talked about their Tusculum experience, Delaplane and E.J. Ham remembered Clem Allison, who served as director of the division of arts and humanities at Tusculum before his retirement in 1996.

“When I took art here, I would sit at the edge of my seat so captivated by the artwork,” Delaplane said. “Then I had the opportunity to go to Greece and see this artwork that he taught. His teaching was phenomenal. When I went to the Parthenon, the person I thought of was him. He left an indelible mark on my heart.”

E.J., who lived in Haynes Hall, graduated with degrees in economics and art education. He said Allison encouraged him to switch from economics because he would not be happy. He said Allison urged him to stick with art instead because he enjoyed the subject and was good at it. In the end, E.J. followed the career choice Allison recommended, teaching commercial art for 40 years.

He also remembered a professor named Dr. Ma, who taught economics. He did not know the professor’s first name but said the faculty member was the No. 1 economist in China before fleeing to come to the United States. He called Dr. Ma “an amazing man,” with extensive knowledge.

“We were excited to have our Golden Pioneers join us for graduation so we can connect this year’s graduates with their predecessors in such a meaningful way,” said Nicole Rader, Tusculum’s director of alumni engagement and special events. “Our alumni are always welcome at Tusculum, and we treasure their contribution to the rich history of Tennessee’s first institution of higher education.”

To learn more about Tusculum’s alumni programs, please visit https://web.tusculum.edu/alumni/. Additional information about the university is available at www.tusculum.edu.