GREENEVILLE – Audiences will find it hard to sit still when the music starts playing during upcoming performances of “Mamma Mia!” in the Marilyn duBrisk Theatre at Tusculum University. 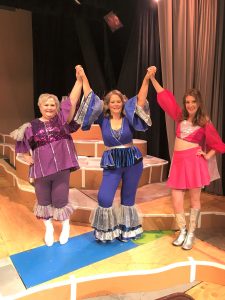 Left to right, Melody Tunnell as Rosie, Laura Dupler as Donna and Megan Lamb as Tanya pose during this photo shoot.

The wildly popular musical will hit the stage for seven shows starting Friday, Nov. 12. The performances will showcase about 25 songs made famous by the pop rock band ABBA, including major hits such as “Dancing Queen,” “Take a Chance on Me” and, of course, “Mamma Mia.”

“This lively and highly entertaining show will enthrall the audience with outstanding musical numbers and excellent performances by the cast,” said Brian Ricker, the director. “Theatre-at-Tusculum is thrilled to bring this musical to our campus, and we anticipate our guests will be singing the tunes on their way home. That is exactly what we want to achieve.”

The musical, which premiered in London in 1999, features the original songs written by ABBA members Benny Andersson and Bjorn Ulvaeus and some songs with Stig Anderson. The book was written by Catherine Johnson.

“Mamma Mia!” is set on a Greek Island and is woven around the story of Sophie Sheridan, played by Reagan Bunch, a young girl on the eve of her wedding day.

Sophie never knew her father but still wishes he could be the one to walk her down the aisle. She discovers three other possible options – Sam, Bill and Harry, played by Jeff Ward, Tom Sizemore and R.J. McCullum, respectively. Sophie invites all three gentlemen to her wedding, much to the dismay of her mother, Donna Sheridan, who is played by Laura Dupler. Donna has not laid eyes on the three men in 20 years.

Other characters contribute to the story. Rosie, played by Melody Tunnell, and Tanya, played by Megan Lamb, arrive for Sophie’s wedding. Rosie and Tanya are former bandmates and best friends of the mother-in-law to be. They reminisce and support Donna as she discovers the three men have arrived for the wedding.

“Mamma Mia!” will be the first show on the large stage in the Annie Hogan Byrd Fine Arts Center since Tusculum named the theater on the top floor after duBrisk. The legendary leader of Tusculum’s arts program brought about 70 productions to life at Tusculum and reinforced the university’s reputation as the home for top-notch arts programming. She retired in 2020, and Tusculum celebrated her excellence during an Oct. 20 ceremony with the theater-dedication ceremony. 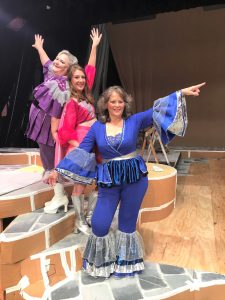 Left to right, Melody Tunnell as Rosie, Megan Lamb as Tanya and Laura Dupler as Donna will be part of the “Mamma Mia!” cast performing in the Marilyn duBrisk Theatre.

“We are so pleased to have such an energetic show for the inaugural performances inside the Marilyn duBrisk Theatre because it reflects the enthusiasm she brought to Tusculum for 29 years,” said Ricker, who also serves as assistant director of Tusculum Arts Outreach. “Our performances of ‘Mamma Mia’ will be a terrific way to continue honoring Marilyn and illustrate our commitment to provide audiences with meaningful shows that contribute to the region’s quality of life.”

Tusculum’s production of “Mamma Mia!” is made possible through a special arrangement with Music Theatre International.

Due to the global coronavirus pandemic, seating is limited to 350 guests for each performance. Audience members must wear a face covering, and touch-free temperature checks will be conducted at the door.

Theatre-at-Tusculum is under the auspices of Arts Outreach and is supported in part by a grant from the Tennessee Arts Commission, Hearts for the Arts, a Walmart Inc. local community support grant as well as many generous donors and volunteers.

For more information about Theatre-at-Tusculum or other Tusculum Arts Outreach programs please call 423-798-1620, visit arts.tusculum.edu or find on Facebook by searching for Tusculum University Arts Outreach.