GREENEVILLE – Churches provide valuable assistance to Tusculum University students and are a vital component in the continuing development of these Pioneers, the higher education institution’s president shared with local clergy. 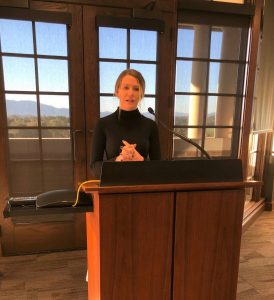 “I am extremely appreciative that churches and individuals have helped us to raise the money needed to hire a full-time chaplain,” Dr. Scott Hummel, Tusculum’s president, said at the Pastors’ Prayer Breakfast, the kick-off event for the university’s Homecoming. “We’re moving forward with that. That is going to help with campus life and enable us to meet the mission of the university. I look forward to hiring the chaplain.”

One of the highlights of the start of the academic year was the presence of churches during new student move-in in August. Dr. Hummel said nine churches participated. Several families told him that they appreciated that community members joined Tusculum faculty and staff in welcoming them to campus.

Other kind gestures Dr. Hummel cited were the purchase by one church of 10 bicycles for students and the adoption of 19 of Tusculum’s sports teams by churches, which have invited the student-athletes to services and attended their games. When he pitched the idea that the remaining teams be adopted, the Rev. Ken Saunders, rector of St. James Episcopal Church in Greeneville, immediately offered to take one of the teams.

“Increasingly, not just at Tusculum but at universities all around, there are a number of students who haven’t been to church and whose knowledge of it is limited to what they have seen from Hollywood, on television and from the internet,” Dr. Hummel said. “If that is all I had ever seen about the church, I would run fast. Sometimes, going to church – as simple as that is – can actually change a lot of their misperceptions about the church.” 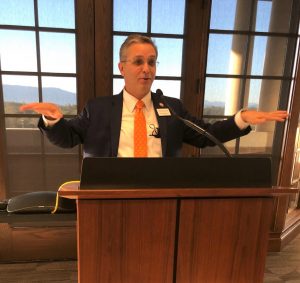 Dr. Hummel shared the story of a Tusculum student who took the president’s Old Testament course and discovered it was his favorite class because it was the first time someone had articulated religion in a reasonable and understandable way. That led to the student wanting to learn more.

“This is a critical time to reach college students,” Dr. Hummel said. “We have an incredible opportunity not just to educate students but to develop the whole person. A part of our mission is that we do what we do in a caring Christian environment. That informs the way that we value every one of our students regardless whether they are practicing religion or not.”

Tusculum is a faith-based institution, and Dr. Hummel noted how the first words in the university’s mission statement – building on a rich Presbyterian heritage – honor what the denomination sought to accomplish in establishing Tusculum. Dr. Hummel said one of the benefits of Tusculum being a private institution is that it can discuss faith in addition to standard academic subjects.

Dr. Hummel discussed the introduction of voluntary chapel sessions for Tusculum students, faculty and staff. Held for 30 minutes on Mondays, chapel allows a Tusculum family member to share an inspiring and insightful message that incorporates Scripture. Dr. Hummel said the sessions enable the Tusculum family to pause, reflect, celebrate and worship as a community.

As part of his remarks, Dr. Hummel quoted from 1 Timothy to challenge churches. 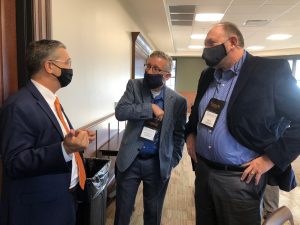 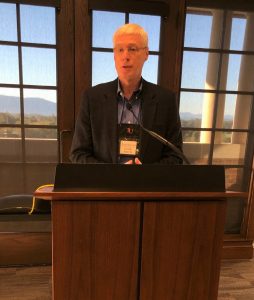 In addition to Dr. Hummel, Bailey Jenkins, a junior who is pursuing a major in special education and is secretary of the Student Government Association, spoke about how Tusculum has contributed to the growth of her faith.

In concluding the event, Dr. David Smith, pastor of Tusculum Baptist Church, thanked God for the good things happening on the Tusculum campus and His blessings on the leadership of Dr. Hummel and others working with him.

“Lord, I pray that You would bless each student and each professor and staff member and help them see that what they do is not in vain and that you are using them to make a difference,” Dr. Smith said. “I pray especially for those students who have grown up in a family where they did not know about Jesus Christ. I pray that through friendships, relationships, events on campus and connections with churches that they will experience You in a personal way and follow You throughout the rest of their life.”