GREENEVILLE – A Tusculum University alumnus who has achieved a highly successful business career, demonstrated a commitment to civic engagement and remained intimately connected to his alma mater has earned an honorary doctorate from the institution. 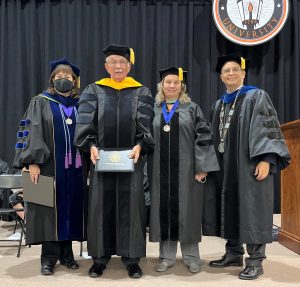 Walter Johnson, a 1971 graduate with a bachelor’s degree in chemistry, received an Honorary Doctor of Science during Tusculum’s fall commencement ceremony Saturday, Dec. 11. With the awarding of this honorary degree by Tusculum’s Board of Trustees Johnson will now have the title “Dr.” placed before his name in all references to him by the university.

Placing the doctoral hood on him was his daughter, Dr. Lisa Johnson-Neas, who serves as Tusculum’s associate vice president of student affairs and retention and dean of students.

“Dr. Walter Johnson is an exceptional business leader and community servant whose personal story provides an outstanding example of perseverance for our students,” said Dr. Scott Hummel, Tusculum’s president. “I am grateful for the wise counsel he provides me and our administrative team as a member of our Board of Trustees. His wisdom and influence have enhanced the quality of Tusculum and ensured we equip our students to be career-ready professionals in a caring Christian environment.”

Kidwell noted how Dr. Johnson, a Greene County native, had studied at another university but returned home to help care for his mother and start a family. As a nontraditional adult student at Tusculum, he completed his degree in seven years.

Dr. Johnson worked through high school and college and hired a number of other Tusculum students, which enabled them to remain in school.

Kidwell highlighted his business talent, including holding several patents on processes involving fused magnesia. His business interests span the globe, and, during his life, he has transformed several struggling companies into financially successful organizations. He remains chairman of the board for Heritage Community Bank, which he helped organize in Greene County, and operates a farm in the community.

Dr. Johnson’s community involvement is extensive. He coached Little League baseball and recreation league basketball for youth and served with the Lions Club of Greeneville. As a private pilot, he provided transportation through Angel Flight, a nonprofit organization, for individuals needing medical care. He is serving as a Tusculum trustee for the second time and has collaborated with Dr. Peter Noll, associate professor of public history and museum studies, on beautification projects.

His faith is a key component of his life. He is a lay speaker in the United Methodist Church and remains an active member and leader in The Gideons International. He has also ministered through mission opportunities.

“Dr. Walter Johnson has helped those around him his entire life,” Kidwell said. “Much of his philanthropy has been behind the scenes. He firmly believes in education, is brilliant and is a servant leader. People’s lives, businesses and Tusculum University are better because of Dr. Walter Johnson.”

Reflecting on the honor Tusculum bestowed on him, Dr. Johnson was appreciative.

“The greatest earthly blessing people can receive is to know that their life’s work has been examined, confirmed and publicly honored by their peers,” he said. “I am forever grateful.” 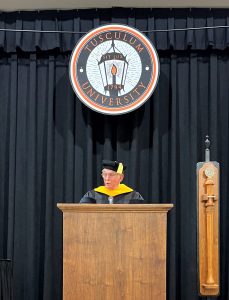 Dr. Johnson addressed the graduates and shared with them the many people who have influenced the path his life would take. They include:

“You have a life of opportunity ahead of you,” Dr. Johnson told graduates. “Take hold of it, and when you leave Tusculum, your first main objective should be to become the most knowledgeable, effective and best person in your profession. If you do that, you’ll never have a problem finding a job, and there will be more opportunities for you.”

He referenced Robert Frost’s poetry to talk about forks and decision points these new alumni will face personally and professionally.

“Use critical thinking – or as my dad use to say: ‘what-if thinking’ – and decide what’s going to happen depending on which route you take,” Dr. Johnson said. “Some points will just happen, and you will have no control over them. When those occur, all you can do is trust God to take care of you. Fifty-one years later, when you look back on your life as I have, you will stop and ponder, ‘How did I reach this point?’ Your first conclusion will be that you didn’t do it alone.”