TUSCULUM UNIVERSITY > News and Information > News > Tusculum celebrates Dr. Scott Hummel with inauguration that highlights his faith and leadership at the university

GREENEVILLE – A celebratory and prayerful tone filled Pioneer Arena as Dr. Scott Hummel took the oath of office during his inauguration as Tusculum University’s president.

The ceremony Friday, Oct. 22, for Dr. Hummel, the university’s 29th president in its 227-year history, was replete with well wishes from Tusculum family members, the community and U.S. Sen. Marsha Blackburn, R-Tenn. The event also reflected the importance Dr. Hummel places on his faith and Scripture as many participants read Bible passages selected by the president and incorporated prayer in their remarks.

“By accepting the role of president of Tusculum University, you accepted the duties of administrator, educator and spiritual leader to one of the brightest and most impressive student bodies in Tennessee. You have made a commitment to support them and to guide them on their life’s path, which will lead them to their faith-manifested destinies. And you will encourage them by living out Christ’s example in the way you do your job. Now, it is a heavy job, but we know that you are equal and prepared and ready for that burden.”

In her address, Blackburn recalled the discussion she had in the spring via Zoom with Tusculum students about the intersection of faith and government. She called it one of the most impactful she had had this year. 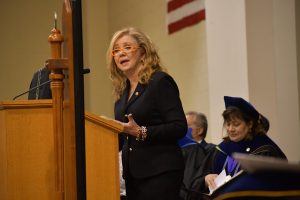 “I’ve thought a lot about that conversation that we had in April, because as the months have rolled by, it has become more and more clear to me that to truly live our faith, we have to do more than just incorporate our faith into our work and our conversations with other people,” she said. “Instead, I think the word to peg on this is that we must manifest our faith in every word and every deed and every interaction until that constant presence of the Holy Spirit that we feel within us motivates everything we do – and it becomes a more reflexive action to live that faith.”

As he spoke to the audience, Dr. Hummel expressed gratitude for all of the people who have made a difference in his life. They include people who told him about the importance of reading his Bible every day and served as mentors to him.

Many people who have been part Dr. Hummel’s life or represent institutions where he has served were part of the platform party or sat in the audience. They included Dr. Johnny Dupree, the former mayor of Hattiesburg, Mississippi; Dr. Ben Burnett, executive vice president of William Carey University; and Dr. Jim Watson, a professor at LeTourneau University.

Dr. Hummel is an alumnus of William Carey and served in high-level leadership positions there for 12 years. He also taught at LeTourneau for 10 years, the last four of which he served as chairman the Department of Biblical Studies and Christian Ministries. He spoke about the impact William Carey has had on his life.

He also provided insight into his decision to accept the Tusculum presidency.

“The reason why I am here today is because of these students who are on this platform and in the audience,” Dr. Hummel said. “It is a privilege and an honor to be able to serve our students and have a role in equipping them for their careers and the callings that God has placed upon all of them.”

Another reason he is at Tusculum is the university’s mission statement, which he regular highlights as a roadmap not only for today but also for the university’s future. The statement is: Building on a rich Presbyterian heritage and a pioneering spirit, Tusculum University provides an active and experiential education within a caring Christian environment to inspire civic engagement, enrich personal lives and equip career-ready professionals. 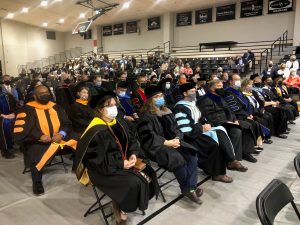 Among the many people Dr. Hummel thanked were his parents, who are no longer alive.

Dr. Hummel said his mother supported and encouraged her children and was certain they could accomplish whatever they wanted.

“What incredible parents I had,” Dr. Hummel said. “My parents didn’t go to college, but they instilled in us a desire to go to college. And now my sister teaches at Purdue. I wouldn’t be here were it not for them. Oh, how I wish they could be here today.”

He also praised his wife, Starr, who he met when they were graduate students at Southwestern Baptist Theological Seminary in Texas. He repeated the story she has shared before about how they were taking a class together and she waited after an exam so she could speak with him.

“I also wouldn’t be here if it wasn’t for Starr and her incredible love and support,” Dr. Hummel said. “She is an incredible woman who has provided encouragement and support through every step of our lives. She is not only smart but talented. Anybody who knows me knows that I am a better person because of Starr.”

Several individuals provided greetings to the president. One of them was Caleigh Blair, president of the Student Government Association, who said Dr. Hummel’s leadership, guidance and vision for the university are exciting and inspiring.

“Since Dr. Hummel has been at Tusculum, we have already seen big changes, and we are happy about what they will mean for our university,” she said. “From restarting our Pioneer music program to beginning chapel at Tusculum, we are excited to see those positive changes in the short time he has been here. We have already seen Dr. Hummel lead us through a pandemic with leadership and grace, all while keeping the students’ best interests at heart.”

“I am honored to extend a welcome to Greene County to the family of Dr. Hummel and wish you the very best in your tenure as president,” he said. “We are very proud of this distinguished institution and all of the faculty, staff and students, and we wish you the very best now and in the future. God bless and Godspeed.”