GREENEVILLE – A Tusculum University faculty member and five students have collaborated to create a customized graphics package for the Ford Mustang that purchasers of today’s model and future ones might add to the car. 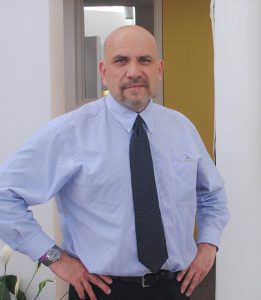 Earlier this year, Bill Bledsoe, an assistant professor of art and design, shared the concept of this package with Lennie Lawson, owner of Gateway Ford and Gateway Nissan, who supported the effort and provided a 2016 Mustang to the Tusculum that would serve as the test case. Now after months of detailed work by Bledsoe and the Tusculum students, the group is ready to show off the car and its new bells and whistles.

The car will be unveiled at 1 p.m. Wednesday, Oct. 27, in front of Pioneer Park, the university’s baseball stadium.

“This was an outstanding project for Tusculum and demonstrates the quality of our art program,” Bledsoe said. “No art department in the United States that I can find has been able to do anything like this. The students have essentially produced a type of car for a major car company that equals or surpasses what the company designed for the car.”

The idea for this project originated because Bledsoe is a big Mustang fan. When the body style changed in 2014, he worked on a cosmetic modification design for his own enjoyment for a couple of years prior to joining the Tusculum faculty. After he began teaching at Tusculum, he decided to involve his students in the project so they could learn about turning a concept into reality using graphic design and better understand color theory.

The students liked the idea of working on the Mustang, so Bledsoe created a production team that had the feel of a real company. The project had to be put on hold in the spring of 2020 when the global coronavirus pandemic arrived in the region, but Bledsoe and the students were able to resume work on the initiative in the 2020-21 academic year.

When Lawson offered him a Mustang on which the group could put the package, Bledsoe chose a red one because of its complexity. He said red is the most difficult color to use for this project, so he picked it as a teaching lesson for his students. It took two months for Bledsoe and the students to complete the project and be sure the finished project looked perfect.

Components made by the group include metal aluminum badges with the American Touring Series name on them; an extensive graphics package, including a reflective C stripe as well as lower accent stripes; and special hood and trunk lid designs.

“The material that we used for the graphics kit has more resiliency against wear and tear than the paint that Ford put on the Mustang,” Bledsoe said. “We were very particular and covered every gamut, including putting a special serial number metal plate inside the glove box that tells when the car was built and all of the details associated with the installation of the custom package.”

Another special element of this project was the tires. Bledsoe said Goodyear no longer makes white-letter tires, but he called the company to see whether it could make a special set for him. He said Goodyear checked into the situation and called him back in 30 minutes to say it would make the tires.

“Lennie Lawson would call to check on the project periodically,” Bledsoe said. “When he looked at the car after we finished, he walked around it three times and did not say anything. He stood beside me and said, ‘Now you told me that when the work on this car was finished and I looked at it, I was going to be convinced it was a production-level looking car.’ I thought he was going to say to him, it did not look like that. He said, ‘This looks like a production car. I want to make these – or something to that effect.’ I was fairly elated.”

Lawson said his expectations were low when Bledsoe first approached him but said that changed when he saw the design in the magazine the group produced. He saw how creative the group was.

“It blew my socks off,” Lawson said. “The presentation in the magazine was high quality. This whole project seemed to be outside the box, and all of the components were really strong. I’m pretty particular when it comes to car design, and it takes a lot to impress me. This was very fresh and innovative, and I was definitely impressed. I notified Ford as soon as I could, and it might feature this project in some way.”

Students who participated in the project and the component they handled are:

Now that the prototype has been built, additional versions of this same package can be produced in 48-72 hours, Bledsoe said. He said the design belongs to him and can be licensed to others.

Bledsoe estimated the package is worth about $2,000-$2,500. He checked with SEMA, an organization that oversees after-market products for cars and learned the average amount of money one out of every three Mustang owners will spend is $3,000-$10,000 to customize the car.

More information about Tusculum’s art and design program is available at https://web.tusculum.edu/academics/programs/art-and-design/?utm_source=art-design&utm_medium=redirect&utm_campaign=art-design.