GREENEVILLE – Many students experience challenges during their pursuit of a degree but persevere and walk across the stage to receive their diploma. 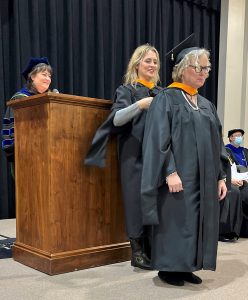 Andi Hooper, right, is hooded by Callie Montgomery during commencement.

Andi Hooper, who graduated Saturday, Dec. 11, from Tusculum University with a master’s degree in nursing, with a family nurse practitioner concentration, faced significant difficulties during her studies but did not let them deter her from her goal.

They included a cancer diagnosis in both breasts during her first semester at Tusculum, followed by a double mastectomy, other related health issues, breast reconstruction and chemotherapy. If that were not enough, she lost her sister to cancer, as well as her father and brother-in-law to other medical conditions during that period. Despite all of that turmoil, this cancer survivor, wife and mother of two moved forward academically and is now on the cusp of even greater achievements in her career.

“God puts you where you need to be, and the support system I received from Tusculum and my family helped me reach this point in my life,” Hooper said. “The faculty members and leaders in the College of Nursing were there for me with any needs that I had or any problems that I experienced. They helped me get through all of this. I can only speak highly of them. They were great.”

Hooper was one of 176 students from 12 states and four nations to participate in the two graduation ceremonies held to mark the end of the fall semester at Tusculum. The university awarded associate, bachelor’s and master’s degrees in a broad array of disciplines. Hooper delivered the invocation during the second ceremony.

In January 2019, Hooper joined the Tusculum family after a career spanning 25 years in nursing, which has included running the emergency department at Holston Valley Medical Center in Kingsport and serving in other administrative posts. She was inspired to pursue her master’s degree by her mother, who told her that she was wasting her talent in administration.

Hooper was proceeding with her master’s studies when she took a mammogram in May 2019 that led to her breast cancer diagnosis. She recalled receiving the news in the break between two of her final exams for that semester. She shared the news with Dr. Susan Wall, her professor for the second exam, who asked her whether she would be able to take the test. She went ahead but has no memory of what she wrote. Fortunately, she passed the exam.

The rest of her academic journey was a balancing act between her studies and her cancer treatments. She had to repeat one class because the effects of her treatment impacted her learning ability slightly, but in the end, everything worked out. Among the people she credits at Tusculum are Dr. Linda Garrett, a former assistant dean of the College of Nursing, and professors Callie Montgomery, Christine Dyer, Carole Hicks and Alice Lawson.

She said her cancer experience helped her when she conducted her clinicals for her master’s degree and worked with patients in a cancer unit. She explained to them the various aspects of the cancer journey they would face so they would be prepared.

Now, she has eyes on serving as a nurse practitioner in a family practice once she passes her board exams.

“When I started clinicals, I realized the foundation for keeping patients out of the hospital is through family practice medicine,” Hooper said. “The efforts of a good family practitioner can help patients lead a healthier life and be proactive about taking care of themselves. I enjoy teaching and educating patients and will welcome that opportunity as a family practitioner.” 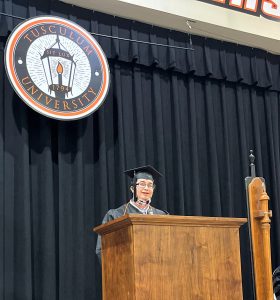 Campbell came to Tusculum at the suggestion of his wife. He wanted a more personal college experience after attending a larger university, where he barely knew his professors and classmates. He found what he sought – a community – at Tusculum.

“As I look out upon this crowd, I can see the smiles of immense pride across my cohort’s faces,” Campbell said. “We will become the salt and light of our future communities – whether close or far – and nothing will stop our light from shining.”

In addition to her studies, Franse was a member of the Tusculum softball team, which won the South Atlantic Conference tournament in the spring. She said that was a fulfillment of a childhood dream and a terrific memory for the end of her playing career. 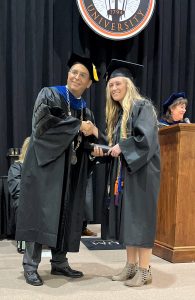 Like Campbell, she was thankful. Franse talked about the positive impact and support of her family and the Tusculum faculty and staff members who helped her. In particular, she expressed gratitude to Dr. Merve Kester-Thomas, chair of the math department, who not only helped her learn the answers to math problems but also showed interest in other aspects of her life, including coming to some of Franse’s games.

Franse also noted the support of Michelle Deford and Stephanie Kirby in the College of Education, who contributed to her development as a future high school math teacher. She loved that Deford prayed before classes began and served as an example of what an educator should be. She said Kirby was immensely helpful in ensuring she completely understood assignments and answered all of her questions.

Students often meet someone special during their Tusculum studies, and for Franse, that was her boyfriend Chris.

“I met him at Tusculum in government class my sophomore year,” Franse said. “He was a sport management major and played on the baseball team. We had so many adventures. Whether it was hiking through the mountains or hitting in the baseball cages late at night, we became best friends. He was one of my biggest supporters in everything I did, and he always knew how to make me smile. Chris, I love you, and I am so glad Tusculum brought us together.”

Franse also spoke to her fellow graduates and quoted Matthew 5:14-15.

“We have changed in the last four years,” she said. “We are smarter, wiser and more experienced individuals, who have learned many skills. This school has impacted us, and now it is time for us to impact other people. I am excited to take the things I have learned and help others, and I know you are as well.”

“As president, one of my greatest joys is welcoming new students to campus,” he said. “They are so full of potential and excitement. But also, one of my greatest privileges is witnessing how much our students have learned and grown from their Tusculum education. Our students were not just prepared to take exams and complete assignments. They’ve been equipped to answer God’s calling in their lives and prepared to fulfill their purpose. We are excited to see what the future holds for our newest alums and will watch with pride as they distinguish themselves in the next stage of their lives.”