GREENEVILLE – Tusculum University will celebrate its 29th president, Dr. Scott Hummel, with an inauguration ceremony that honors the institution, showcases the gifts he brings to the university and recognizes the diversity of the student body. 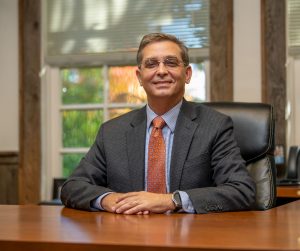 The ceremony will take place Friday, Oct. 22, from 10-11:30 a.m. in Pioneer Arena on the Greeneville campus. It will provide the opportunity for the university and the community to formally welcome Dr. Hummel to Tusculum, to which he has brought academic program growth and a renewed focus on the university’s heritage as a faith-based institution while successfully steering the university through the global coronavirus pandemic.

Dr. Hummel has served as Tusculum’s president since February 2020, but his inauguration was delayed until now due to the pandemic.

“We are excited to hold this ceremony, which is normally a way to mark the beginning of a presidency but now provides us a chance to reflect on all Dr. Hummel has accomplished to advance Tusculum,” said Dr. Greg Nelson, chairman of the university’s Board of Trustees. “Dr. Hummel has hit the ground running and has provided us with a mission-driven focus that has given us the foundation for long-term success. We are delighted Dr. Hummel is serving as our president and know he will take our university to even greater heights.”

U.S. Sen. Marsha Blackburn, R-Tenn., is scheduled to serve as the guest speaker at the inauguration, expanding on the ties she has established with university since her election. In April, she participated in a virtual question-and-answer session with Dr. Hummel and students about the intersection of faith and government. In August, she visited the campus and learned about the history of Tennessee’s first higher education institution and the success the university is achieving today.

Tusculum students will play an integral role in the ceremony, with international students placing flags from their home countries in a holder. The university enrolls students from 33 countries. In addition, Caleigh Blair, the Student Government Association’s president, will provide a greeting to Dr. Hummel, and Trenton Gibson, a graduate student, will read Proverbs 2:1-10.

Others who will offer greetings to Dr. Hummel will be:

Dr. Nelson will issue the oath of office to Dr. Hummel and place the chain of office on him, with assistance from Starr Hummel, the university’s first lady. Dr. Hummel will give an inaugural address.

“It is an honor to serve at such a historic university, where I have the opportunity to work with faculty and staff to provide an outstanding education within a caring Christian environment as we equip our students to be career-ready professionals,” Dr. Hummel said. “Tusculum has many strengths, and I welcome the opportunity to build on them and help all of our students attain personal, professional and spiritual success in their lives.”

During his 20 months as president, Dr. Hummel has established strong ties with local clergy and faith leaders and is in the process of bringing a full-time chaplain to the university. He was the presenter during this year’s Theologian-In-Residence series and will lead a trip to the Holy Land in June.

Dr. Hummel has also restarted the Tusculum music program and incorporated ongoing support for the university’s theater program as part of an $800,000 fundraising campaign that remains ongoing. He has also emphasized the importance of Tusculum’s mission statement serving not only as a guide for today but also for the future.

This fall, Tusculum added multiple academic programs. These include:

Dr. Hummel came to Tusculum from William Carey, where he had served in high-level leadership roles since 2008, most recently as executive vice president and provost. Before that, he was a biblical studies professor at LeTourneau for 10 years, the last four of which he was chairman of that institution’s Department of Biblical Studies and Christian Ministries.

Dr. Hummel is a biblical scholar who earned a Bachelor of Arts in biblical studies from William Carey in 1987. He received a Master of Divinity in biblical languages in 1991 and his doctorate in biblical backgrounds and archeology in 1996, with both degrees coming from Southwestern Baptist Theological Seminary. He also studied at the Hebrew University in Jerusalem.

“I am grateful to everyone who has shaped my life personally, guided me along my professional path and contributed to my faith development,” Dr. Hummel said. “This inauguration is as much about their contributions as it is about me achieving this special milestone in my professional career. I am also thankful to Starr and my daughters, who have been with me throughout my academic and spiritual journey.”

Following the ceremony, Tusculum will hold an Inaugural Luncheon and the President’s Inaugural Dinner.

Anyone with questions about the event can contact Nicole Rader, director of alumni engagement and special events, at nrader@tusculum.edu or 423-636-0565. More information about the university is available at www.tusculum.edu.