GREENEVILLE – Tusculum University has honored one of the biggest contributors to the expansion of the arts in the region and the leader in bringing high-quality entertainment to the institution for nearly 30 years by renaming the largest theater on campus after her. 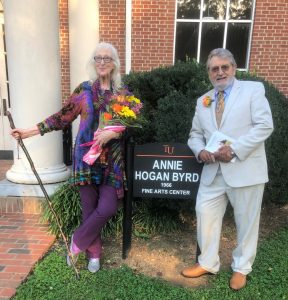 Marilyn duBrisk, left, and her husband Wess take a photo outside the Annie Hogan Byrd Fine Arts Center after the dedication ceremony.

In a ceremony Wednesday, Oct. 20, Tusculum dedicated the Marilyn duBrisk Theatre on the main floor of the Annie Hogan Byrd Fine Arts Center. The celebration recognized duBrisk, who retired in 2020 after 29 stellar years of leadership as Tusculum’s artist-in-residence.

“When I came to Tusculum, one of the first people I had the pleasure to meet was Marilyn, and it quickly became evident to me how passionate she was that everyone should have the opportunity to enjoy the arts,” said Dr. Scott Hummel, the university’s president. “Tusculum was fortunate to have Marilyn as the driving force for our arts program, and we will reap the benefits of her hard work for generations. It is highly appropriate for us to name this theater after Marilyn as a way to express our gratitude for her commitment to our arts program.”

Adding to this special event, Tusculum’s theater program incorporated the arts by having cast members of the upcoming performances of “Mamma Mia!” and students from GLAWPIGT, an acronym for Great Literature Alive Well Playing in Greeneville, Tennessee, perform a blend of two songs from that musical.

Other elements included a “Thank you, Marilyn!” video presentation, produced by Nathan Colmer, who has performed with Theater-at-Tusculum and whose daughter is a GLAWPIGT member, and a painting by Bill Bledsoe, assistant professor of art and design, that depicts duBrisk on the stage in the theater that now bears her name.

duBrisk was quick to credit others for Theatre-at-Tusculum and Tusculum Arts Outreach’s achievements. 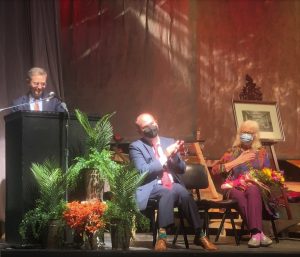 Marilyn duBrisk addresses the audience during the event.

“I feel overwhelmed by the honor, especially because the success of Arts Outreach and Theatre-at-Tusculum was due to the brilliance and support of so many people,” duBrisk said. “I feel really blessed that Tusculum University not only has supported the outreach program but also gave me ample artistic freedom. Our Arts Outreach staff have always been exceptional, and it is such a thrill to know that the program is continuing thanks to Dr. Hummel.”

duBrisk brought about 70 productions to the stage and reinforced Tusculum as a premier venue for high-quality theater. She was also a highly regarded figure in the community, working closely with teachers in local schools and sharing items from Tusculum’s extensive costume shop. She was especially proud of her work with GLAWPIGT, a group of students in grades 3-12 that meet at Tusculum to study performance and inspire other students to find excitement and interest in reading,

Originally from Scotland, Marilyn also lived in Central East Africa before attending college in London. She later took a teaching job in Germany, where she met her husband Wess, and then moved around with him while he continued to serve in the U.S. Air Force.

The duBrisks came to Greene County in 1984 when Wess became director of mass communications at Tusculum. She became artist-in-residence for Greeneville City Schools and stayed there until 1991, when she accepted the same position at Tusculum. In her early years in the region, she sponsored a program to provide books for infants, a predecessor to Dolly Parton’s Imagination Library. 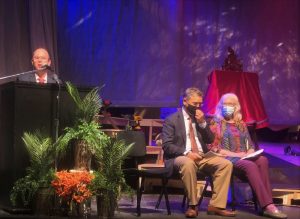 Wayne Thomas, dean of the College of Civic and Liberal Arts, speaks during the event.

“The day Marilyn and Wess arrived in Greene County was a transformative event for theater in the region,” said Wayne Thomas, dean of the College of Civic and Liberal Arts. “Her reach became even greater when she came to Tusculum and set a standard for excellence we will be pleased to uphold as a tribute to Marilyn. Naming the theater after Marilyn is the perfect way to thank her for leading a program that flourished, presented opportunities for so many people to display their creativity and enhanced the region’s quality of life.”

duBrisk said one reason she relished the idea of coming to Tusculum was the ability to incorporate the Greene County schools more in theater programming. She has also attracted home-schooled children and many people throughout East Tennessee who saw the value of the Tusculum program.

Among the people duBrisk specifically cited as critical to the theater program’s success were Thomas; Jennifer Hollowell, director of Tusculum’s Center for the Arts; Brian Ricker, assistant director; Frank Mengel, Arts Outreach’s technical director; and Erin Schultz, Tusculum’s costume director. But the most important person on her list was her husband, without whom, she said, none of her success would have been possible. 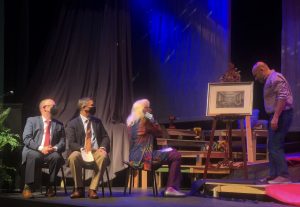 Bill Bledsoe, assistant professor of art and design, presents his painting that depicts duBrisk on the stage in the theater that now bears her name. 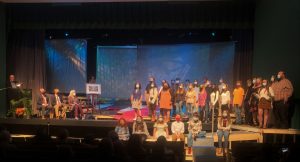 Cast members of the upcoming performances of “Mamma Mia!” and students from GLAWPIGT, an acronym for Great Literature Alive Well Playing in Greeneville, Tennessee, perform a blend of two songs from that musical.

She was happy she was able to work with actors as young as 2 ½ years old — hatched as one of Horton’s eggs in “Seussical” – all of the way to senior citizens. duBrisk is proud so many of the students who have come through her theater program have proceeded to lead highly successfully careers.

“This program has brought me so much joy, but gratitude must come first,” duBrisk said. “And I am truly grateful.”

To support Tusculum’s theater program, please visit www.tusculum.edu/give or call the Office of Institutional Advancement at 423-636-7303.