GREENEVILLE – The Meen Center at Tusculum University recently showcased another learning dimension as it hosted a two-day quiz bowl that brought about 55 players to Tennessee’s first higher education institution. 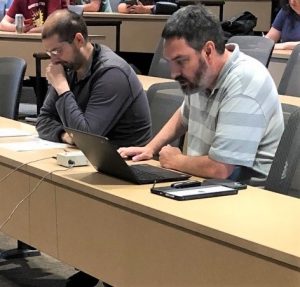 Dr. Chuck Pearson, right, chairman of Tusculum’s Natural Science Department and an associate professor of natural sciences, organized the event and moderated some of the games. Seated next to him is Jake Sundberg of the University of Louisiana at Lafayette, who was one of the competitors during the weekend as well as a staffer for a tiebreaker match.

The event attracted participants from various locations in Tennessee as well as from Southwest Virginia and other states, such as Alabama and Michigan. Quiz bowl contestants ranged from high school and college students to older adults, who spent Saturday, July 10, answering questions on broad array of academic subjects before delving into pop culture Sunday, July 11.

“This spectacular weekend showcased bright minds and aligned nicely with the active and experiential education Tusculum delivers,” he said. “We were pleased participants were able to see firsthand our state-of-the-art Meen Center and beautiful scenery of the Tusculum campus. It was also thrilling for us to have high-level players who contributed greatly to our strong academic environment.”

Dr. Pearson said quiz bowl participants registered as two-person partnerships. Event organizers then paired each partnership with another one to form a team that competed against other teams, which were created in the same manner. Seven games took place simultaneously throughout the day.

While everyone wanted to win, the atmosphere at the quiz bowl was collegial, engaging and fun. During each game, which lasted about 30 minutes, the moderator would briskly read the questions and award the assigned points to whichever team answered correctly. The questions, modeled after those used in the National Scholastic Championship, a premier high school tournament, were extensive and contained multiple sentences. 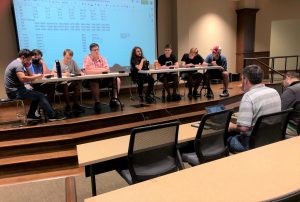 College students compete in one of the games held during the quiz bowl.

Leading this quiz bowl is a natural fit for Dr. Pearson. He has supported academic competitions for middle and high school students and has served as a moderator in matches at quiz tournaments and championships in various parts of the country and at the Tennessee Science Bowl.

Dr. Pearson will demonstrate his leadership skills again in September, when Tusculum hosts a quiz bowl for high school students. The Saturday, Sept. 11, event will bring about 80 students to the Meen Center.

“We look forward to hosting those students in September and holding other competitions in the future on our campus,” Dr. Pearson said. “The exchange among participants is beneficial, as it strengthens teamwork, demonstrates good sportsmanship and allows individuals to recognize how their education expands their knowledge in a meaningful way.”

To learn more about these events, please email Dr. Pearson at cpearson@tusculum.edu. For additional information about the university, please visit www.tusculum.edu.