GREENEVILLE – The Greene County Heritage Trust has helped kick-start a Tusculum University initiative to restore a chimney at both the Doak House Museum and adjacent academy and enhance usage of the two buildings. 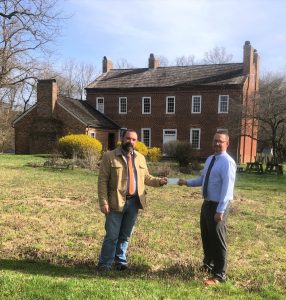 The university plans to make adjustments to the chimneys so they meet modern building codes and can be used safely. The project will enable Tusculum to incorporate the hearths that are connected with the chimneys into more programming and classroom experiences for students and professors.

The Heritage Trust is supporting the initiative with the donation of $2,250 at the Doak House’s request. Tusculum is now seeking other donations to enable the university to cover the total project cost, which will run about $10,000.

“The Doak House Museum and the academy provide a window into our heritage as an institution and the early days of the community,” said Dr. Scott Hummel, Tusculum’s president. “They are an excellent entryway into our historic university, the first higher education institution in Tennessee. We are grateful to the Heritage Trust for recognizing the value of increasing our programming at the house and academy and know the group’s investment will further strengthen learning opportunities and our ties with the community.”

“These buildings are easily accessible and have been used by many people through the years,” Scott said. “Supporting this project is a tangible way to generate even more knowledge and interest in local history and bring more attention to the Doak House. We want to piggyback on that effort and bring more awareness of the Heritage Trust and our work to preserve Greene County’s past. It’s a win-win for everyone.”

Having a restored chimney connected to the hearth in the kitchen of the Doak House will enable Tusculum to incorporate foodways into programming, said Dr. Peter Noll, associate professor of public history and museum studies. A local garden club has planted an herb garden on the back side of the house, and Dr. Noll and Ethan Walling, a museum assistant, have planted corn and pumpkins on the grounds.

Dr. Noll said Tusculum plans to take some food items grown on the grounds and cook them in the kitchen. He said the cooking could touch a variety of people, such as local primary and secondary school students, community groups and Tusculum students. The visitors would have a chance to participate in the cooking process, which aligns with the active and experiential learning Tusculum offers.

The chimney project will benefit the academy by providing warmth for it to be used year-round since the building has no other heat source, Dr. Noll said. That will also enable the academy to hold university classes, Tusculum student clubs and meetings for community groups at any time while adding to the ambiance of that building.

In the fall, Tusculum is scheduled to hold classes in the academy. That is a nod to the university’s past since that building is a reproduction of the original Tusculum Academy, which subsequently merged with Greeneville College to become what is known today as Tusculum University.

“It is a great location for upper division conversation-based courses,” Dr. Noll said. “Taking a course in the academy will create a memorable experience for students who will have that opportunity. This will have a charm that is unique and will enable students to understand the type of classroom where their predecessors from 200 years ago would have studied.”.

The Doak House Museum is a nonprofit educational institution established as a museum in 1975. In about 1830, the Rev. Samuel Witherspoon Doak, who co-founded Tusculum Academy with his father, the Rev. Samuel Doak, built the house. Doak descendants continued to live in the house until the 1970s. In the mid-1970s, the house was donated to Tusculum University, and the Heritage Trust restored it with the help of a grant from the American Revolution Bicentennial Administration.

Anyone interested in donating to the chimney project can contact Tusculum’s Office of Institutional Advancement at 423-636-7303. To learn more about the initiative or to ask questions, please email Noll at pnoll@tusculum.edu.