GREENEVILLE – The Tusculum University Alumni Association honored three of its own and the chairman of the higher education institution’s Board of Trustees during its annual meeting Saturday, Oct. 23, in Chalmers Conference Center on the Greeneville campus. 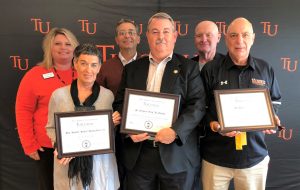 Jackie Rose, Dr. Greg Nelson and Angelo Botta, left to right in the front row, hold their awards. They are joined on the back row by, left to right, Nicole Rader, Dr. Scott Hummel and Bob Kleinertz. The other winner, Anup Kaphle, was unable to attend.

The association presented the National Alumni Recognition Award to Dr. Greg Nelson, board chairman and Tusculum’s former acting president. In addition, the group bestowed the National Living Faculty Award on Angelo Botta, a 1975 graduate and an assistant professor of sport science and a former coach at the university.

The Frontier Award went to Anup Kaphle, a 2007 graduate who has excelled in journalism, and the recipient of the Pioneer Award was Jackie Rose, another 1975 graduate who served for the last two years as president of the Alumni Executive Board.

“All of these individuals are exceptional supporters and representatives of Tusculum and have been significant contributors to the university’s success,” said Nicole Rader, director of alumni engagement and special events. “We are proud they are Pioneers and are confident their positive reflection on the university will continue.”

The National Alumni Recognition Award dates to 1996 and is presented to individuals who make excellent contributions to the university. The National Living Faculty Award also originated in 1996 and is bestowed on someone who has contributed to the success of Tusculum’s academic programs.

The Frontier Award, created in 1995, goes to Tusculum alums in recognition of their outstanding or meritorious advancement in their careers. The Pioneer Award, started in 1962, is presented to alums not only for achievement in their careers but also for distinguished service to their churches, communities, countries and humanity as well as continuing and loyal service to the university.

In addition to the awards, the Alumni Association elected officers for the next two years. They are:

The association also honored the five alumnae from Tusculum’s College of Nursing, who provided care in New York in the early days of the global coronavirus pandemic. They are Ansley Guerrero, Lynsey Hughes, Calyn Kelly, Brianna Stine and Madi Wesley.