GREENEVILLE – U.S. Sen. Marsha Blackburn experienced the breadth of Tusculum University from its earliest days to its cutting-edge research labs in place today during a recent campus tour. 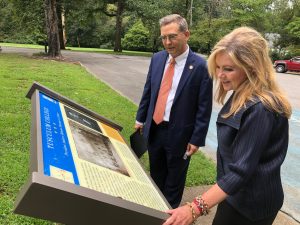 During her visit to Tennessee’s first higher education institution Wednesday, Aug. 18, Blackburn, R-Tenn., visited Old College, a building dating to 1841, which houses the President Andrew Johnson library and archive. She also toured the Thomas J. Garland Library, the primary campus library, which is named after a former state senator and interim Tusculum president. In addition, Blackburn saw the exterior of McCormick Hall, which is named after Nettie Fowler McCormick, one of Tusculum’s early benefactors.

Blackburn concluded her tour with a visit to the university’s newest building, the Meen Center, where she saw the state-of-the-art science laboratories and learned more about the nursing program and the Center for Academic Success and Tutoring.

“We were honored to have Sen. Blackburn join us and share her insights as we showed her around our beautiful and historic campus,” said Dr. Scott Hummel, Tusculum’s president. “Sen. Blackburn has been a tremendous supporter of our students and the university, and we are thankful we could show her our pioneering spirit and the many ways we equip our students to be career-ready professionals. We look forward to continuing our collaboration with Sen. Blackburn.”

Earlier this year, Blackburn participated in a question-and-answer session with several students and Dr. Hummel via Zoom about the intersection of faith and government. She also sent Dr. Hummel a welcome letter when he joined the Tusculum family in February 2020.

During the tour, Dr. Hummel was joined by multiple faculty and staff members, who explained Tusculum’s history and today’s accomplishments at the university. A fascinating factoid Dr. Hummel shared is that one of the early donations to Tusculum came from President George Washington, when he was still in office.

While she was in the Garland library, Blackburn learned the facility received a donation from Andrew Carnegie, an industrialist and philanthropist, to pay for the original portion of the building. The library was initially a multiuse facility that included a gymnasium with a running and walking track. That track is located in the section of the building that now houses portraits of former Tusculum presidents, and the gym is now the main reading and computer room.

Dr. Peter Noll, an associate professor of public history and museum studies, provided extensive detail about the university and Johnson, who, like Blackburn, was once a U.S. senator from Tennessee. He showed her the charter for Greeneville College, a predecessor name for Tusculum, which was signed in 1794. He also had on display a Johnson hat and his presidential impeachment records. He said some books in the building are more than 500 years old.

Blackburn was curious about the care Tusculum takes with the historic items, and Dr. Noll shared that the protective measures vary depending on the material.

“I served on the board for the Smithsonian Library for several years, and it was always so amazing to me the extra care that was needed for all of these documents to secure them to be sure they didn’t lose the ink or the colorization and the paper didn’t crumble,” she said.

When they arrived at the Meen Center, Blackburn was immediately impressed.

“This is a beautiful building,” she said.

Dr. Heather Henson-Ramsey, dean of the College of Science, Technology and Math, showed the many science labs in the building, including biology, general chemistry and organic chemistry, all of which encompass two floors. In one of those, Tusculum teaches pre-nursing and pre-medical students. She highlighted how the students stay together and have the same teacher for lectures and the labs in that room due to the smaller class sizes available at Tusculum.

In one of the other labs in the building, students are working with Dr. Dennis Ashford, an assistant professor of chemistry, on developing anti-cancer drugs. Dr. Henson-Ramsey said it is important for students, particularly first-generation students, to have access to paid research opportunities, which are available at Tusculum. Without those paid opportunities, students are often unable to participate in research because of the financial challenges they face.

Blackburn especially liked the student-to-student tutoring that occurs in the Center for Academic Success and Tutoring. Lisa Chiapputo, associate director of tutoring services, said Tusculum endeavors to have 20-30 peer tutors as well as some graduates who share their expertise in their fields.

“It’s also a professional development opportunity for the tutors,” Chiapputo said. “For a lot of them, this is their first job, and it enhances their skills.”

To learn more about the university, please visit www.tusculum.edu.