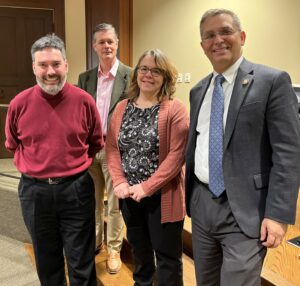 Dr. Heather Henson-Ramsey, dean of the College of Science, Technology and Mathematics, announced the honor during a recent Faculty Assembly meeting.

“This well-deserved honor appropriately recognizes Dr. Pearson for his excellence in the classroom and his leadership in the sciences,” Dr. Henson-Ramsey said. “Dr. Pearson is an exceptional mentor for our students, and they admire him greatly for the passion he brings to his teaching. We are fortunate to have Dr. Pearson’s expertise and commitment to enhancing students’ knowledge in fun and engaging ways.”

The Dr. Ronald H. Meen Distinguished Professor of Chemistry Endowed Fund provides financial support of an outstanding educator and researcher in chemistry at Tusculum. Endowed earnings can be used for various initiatives, including research, publication and attendance at conferences or support of the professor’s work at the university. They can also be used for instrumentation, technology or other academic and scholarly needs.

Dr. Meen’s wife, Verna June Meen, established the endowed fund as a memorial to him and to ensure the success and future of chemistry education at Tusculum.

“The fact that we have this endowment for a position that’s centered primarily on capacity for teaching is a rare blessing,” Dr. Pearson told his colleagues. “It’s another way this university plays an integral role in supporting students seeking a bachelor’s degree. I’m incredibly grateful to accept this title and use it to perpetuate the importance of education of undergraduates that this institution represents.”

A Tusculum faculty member since 2016, Dr. Pearson was promoted to full professor effective this academic year. He has served as chair of the Natural Sciences Department since January 2021, leading an academic department that has been heavily engaged in undergraduate research. These projects include examining potential new anti-cancer drugs, habitat of unique Appalachian species and natural compounds in plants. The department also leads initiatives to reduce textbook costs for students through the use of open educational resources.

Dr. Pearson has taught in higher education for 22 years. He teaches general chemistry, biochemistry and physical chemistry, as well as general physics, at Tusculum. When he is not working, Dr. Pearson leads or otherwise supports academic competitions for middle and high school students. He has served as a moderator in matches at quiz tournaments and championships in various parts of the country and at the Tennessee Science Bowl.

In September, he directed the Tusculum Earlybird, which brought about 80 high school students from three states to the Meen Center.

The Meen Center is one of Tusculum’s most prominent buildings. Mrs. Meen donated $3.875 million toward construction of this state-of-the-art facility, which houses Tusculum’s various science programs. As he accepted the distinguished professorship, Dr. Pearson spoke about the positive impact the Meens made at Tusculum.

“The name Verna June Meen and the name Ronald Meen are super important to what we have in this building to support education, not just in chemistry but across the sciences,” he said. “We’re thankful every day to be able to work in this facility with such outstanding equipment and other resources for faculty and students.”