GREENEVILLE – A former Israeli soldier, who fought in the Six-Day and Yom Kippur wars, will discuss the modern state of Israel throughout his life during a free lecture, open to the community, at Tusculum University. 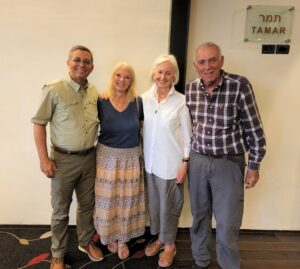 Mishi Neubach, right, is joined by Dr. Hummel, left, and First Lady Starr Hummel, second from left, in this photo. The other person is Dianne Benton a mutual friend of Neubach and Dr. Hummel. 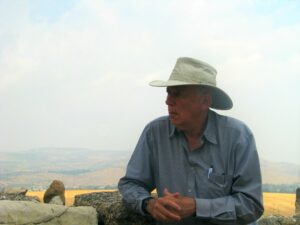 Mishi Neubach will conduct his lecture at 7 p.m. Thursday, Sept. 1, in the Meen Center. It will be part of a two-day visit to Greeneville that will feature a dinner at the President’s House, lectures at two Old Testament classes at Tusculum and a speaking engagement at First Presbyterian Church in Greeneville.

“We are honored to have Mishi join us to provide insight into Israel through his own life experiences,” said Dr. Scott Hummel, Tusculum’s president. “He was born one year before the establishment of the modern state of Israel, and his life somewhat parallels the progress of the state. His family is typical of those who came from Europe before and after World War II. He has grown up with the state.”

Neubach has been a friend of Dr. Hummel for 24 years. He serves as a tour guide who Dr. Hummel has used for all of his trips to Israel, including this summer. Also a teacher, Neubach is a graduate of the Hebrew University in Jerusalem, where Dr. Hummel studied for a year. Neubach focused his graduate studies on the apostle Paul.

In June, Dr. Hummel led a 12-day trip to Israel that included representatives and friends of Tusculum. In addition to traveling through the country, they visited an active excavation. Tusculum students and others interested in ancient Israel will have an opportunity in the summer of 2023 to excavate in Israel.

Dr. Hummel is planning another tour of Israel in June 2023, and anyone who is interested in traveling to or excavating in Israel can email him at shummel@tusculum.edu.

To learn more about the university, please visit www.tusculum.edu.