TUSCULUM UNIVERSITY > News and Information > News > Leader of excavation at Tel Lachish in Israel, which has biblical connections, to speak at Tusculum

GREENEVILLE – The community is invited to Tusculum University for an insightful presentation by the leader of the excavation work taking place at Tel Lachish in Israel in search of Iron Age fortifications. 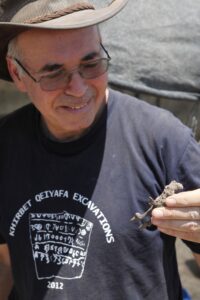 Dr. Yosef “Yossi” Garfinkel, a professor of archaeology at the Hebrew University in Jerusalem, will discuss the importance of Lachish in and its connections to biblical history at 10 a.m. Monday, Nov. 7, in the Meen Center lecture hall. During the event, Dr. Scott Hummel, Tusculum’s president, will share information about the exciting opportunity to tour Israel, after which some can participate in the excavation, in the summer of 2023.

“Dr. Garfinkel’s presentation will offer his audience a fuller understanding of what transpired in the Holy Land centuries ago and give a glimpse into life of the ancient world and biblical events,” Dr. Hummel said.

Tel Lachish is the site where the ruins of the ancient Canaanite and Judean cities of Lachish are located. Because it was the second largest city in ancient Judea, second only to Jerusalem, and because it has not been occupied since 150 BC, it is one of the best preserved sites in Israel.

“Lachish is one of the most famous sites in Israel, with connections to all parts of the ancient Near East and the Biblical tradition,” Garfinkel said. “It was a flourishing Canaanite city in the second millennium BC, with three temples and the main center for the development of the alphabet script. In the time of the Kingdom of Judah, Lachish was the second most important city after Jerusalem.”

Garfinkel said Lachish was heavily fortified but that Sennacherib, king of Assur, conquered it in 701 BC. That event is discussed in three biblical books, he said.

“The lecture at Tusculum will give a brief survey of the previous expedition to Lachish and the contribution of our excavation for a better understanding of the history of Lachish, history of the Kingdom of Judah and the biblical tradition,” Garfinkel said.

Garfinkel is the Yigael Yadin Chair in Archaeology of Israel and a professor at the Institute of Archaeology, in the Biblical Department, at the Hebrew University of Jerusalem. Since 2007 he has concentrated his research on the early, heavily debated, phases of the Kingdom of Judah, in the 10th and 9th centuries BCE. Garfinkel conducted excavations and surveys at Khirbet Qeiyafa, Socoh, Tel Lachish and Khirbet al-Rai. New data on the early kings of the kingdom – David, Solomon and Rehoboam – had been uncovered.

He is the author of 12 books and more than 100 articles. His research interests are the Neolithic period of the Near East, the history of dance, the Chalcolithic period and the biblical kingdom of Judah.

“As part of our active and experiential education at Tusculum, we encourage our students, faculty, staff and the community to seize the opportunity to hear from Dr. Garfinkel and to travel to Israel this coming summer,” Dr. Hummel said. “Having experts such as Yossi come here to cast additional light on historical and biblical events enriches personal lives by enhancing people’s knowledge of time periods that are central to their faith. We are thrilled to have Yossi on campus and to be a resource for people’s spiritual development.”