GREENEVILLE – When you ask Jennifer Hollowell to name her favorite productions at Tusculum University, it is a challenging task for her because she has assisted with so many. 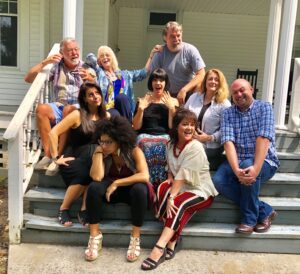 Jennifer Hollowell, second from the right, enjoys a theatrical moment at the Costume Shop with the “Matilda the Musical” production team in 2019.

Hollowell has been in the thick of Tusculum productions for about 20 years, handling behind-the-scenes tasks and running the box office for shows in the Annie Hogan Byrd Fine Arts Center as coordinator of Tusculum Arts Outreach. In the last year, she took more of a front-seat role as director of Tusculum’s Center for the Arts.

Now, Hollowell’s connection to Tusculum has shifted to future spectator at performances and volunteer with Arts Outreach and the College of Civic and Liberal Arts. She retired from Tusculum May 31 and is now spending what remains of her working days focusing on her food catering interests.

“I enjoyed the opportunities to support people’s visions, goals and ideas,” Hollowell said. “It’s been a pleasure working with so many TU folks and mentoring students when I had the opportunity. I was so pleased that there was a vision to support and promote all of the arts at Tusculum.”

Hollowell, an Indiana native, came to Tusculum in the late 1980s, working in the Office of Admission, overseen then by Mark Stokes. Her husband, Mike, had joined Tusculum as men’s basketball coach. She later worked in the Academic Dean’s office and assisted in assessment and advising. She switched to Arts Outreach in the early 2000s and collaborated with the legendary Marilyn duBrisk, who served as Tusculum’s artist-in-residence.

“Marilyn and I worked on recruiting students in the local area who had interest in theater,” Hollowell said. “I learned so much from Marilyn about theater, outreach into the community, public relations and hosting guests to campus – many things I perhaps would not have encountered if not working with her.” 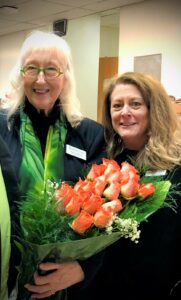 Jennifer Hollowell, right, is with Marilyn duBrisk after a production. 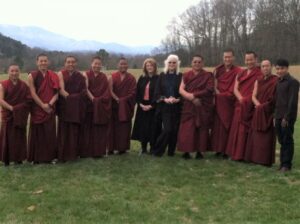 Jennifer Hollowell and Marilyn duBrisk helped host the Tibetan monks of Drepsung Loseling Monastery for the second time in 2013.

duBrisk was not the only one who influenced her career. Longtime staff members, such as Frank Mengel, Erin Schultz and Brian Ricker, as well as the many performers from the student body and the community, became staples in her life. After duBrisk’s retirement, she teamed with Wayne Thomas, dean of the College of Civic and Liberal Arts and executive director of Arts Outreach, and honed skills she learned from him, such as resourcefulness and tenacity.

“My role in admission as local recruiter, as well as with Arts Outreach, was deeply rooted in community connections,” Hollowell said. “I loved that about working at Tusculum. It gave me a chance to bring the community to campus and the campus to the community.”

Thomas is glad Hollowell will continue to have a presence at the university.

“Jennifer has been extremely helpful in ensuring we have high-quality productions and programs that allow us to be a leader in civic engagement through the arts,” Thomas said. “She has been a valuable partner. We are grateful to her for her outstanding service to the university and to our region at large.” 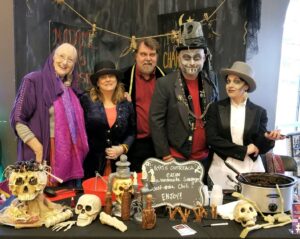 The Tusculum Arts Outreach team participates in the Chili Cook-Off in 2019. Jennifer Hollowell is second from the left.

Hollowell has always loved to cook, and that hobby grew as word spread about her talent in the kitchen. She will now have more time to dedicate to cooking and is looking forward to that. In May, she provided food for a live broadcast of the “3rd Hour of Today” in South Carolina. The production crew, hosts and guests needed a caterer for the three-day production, and her longtime friend, Beverly Serral, who was involved in bringing the show to South Carolina, shared her name.

Returning to the subject of her favorite productions at Tusculum, Hollowell highlighted several – “Twelfth Night,” “Addams Family” and “The Odd Couple.” She said “I Never Saw Another Butterfly” was one of the most profound shows she had seen. She relishes her forthcoming opportunities to watch productions from the seats.

“I am really looking forward to showing up at events and being a patron,” she said. “No longer looking through the little window in the theater door to watch a production will be a treat.”