GREENEVILLE – Members of the Tusculum University band program are adding holiday spirit to the taping of an upcoming national television show. 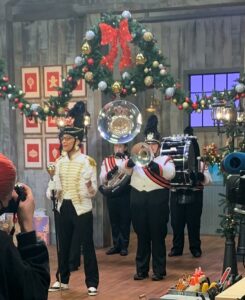 Members of the Tusculum band participate in the taping of an episode of “Holiday Baking Championship: Gingerbread Showdown.”

Four musicians from the band were recently filmed marching for an episode of the Food Network show “Holiday Baking Championship: Gingerbread Showdown.” They rose at 4 a.m. and headed to the Discovery Center in Knoxville to play Christmas songs for their part in the show.

“This was a tremendous experience for these pioneers in our reinstituted band program,” said Dr. Scott Hummel, Tusculum’s president. “These students are blazing the trail for a successful program that will not only add to their individual development but also enhance the campus experience for everyone. It is nice to see them have such an amazing opportunity to represent the university on a national stage.”

The students who participated and the instrument they played are:

No airdate has been given for the show, but it will be later this year.

Uniforms for the re-formed band are on order, so when this opportunity arose, Dr. Gonzalez enlisted the aid of local high schools. Morristown East High School responded by providing uniforms, which Erin Schultz, Tusculum’s costume director, modified slightly to give a Tusculum feel. Chuckey-Doak High School supplied shakos and plumes. 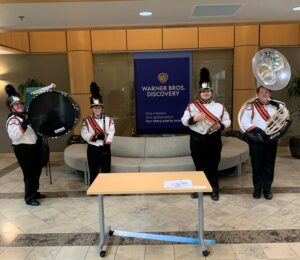 The Tusculum Band, which is developing into multiple groups, has most prominently performed as a pep band at Tusculum’s home basketball games and as a traditional band at a number of events on campus in the last year. Some of the members also participate in the Greene County Community Band. The band will perform during the Homecoming parade in October and as a pep band during the final three home football games this year.

Starting with the 2022-23 academic year, Tusculum added a music minor to the course catalog. In the future, Tusculum plans to have a marching band for home football games and create a university choir.

“These are exciting times for our music program, and we thrilled to be on a path for continued growth,” Dr. Gonzalez said. “For students who enjoy playing an instrument or demonstrating their love for music in other ways as well, our program is ideal. We welcome the opportunity to speak with high school students who seek an outlet for their musical interests while studying at an exceptional university.”

For more information about the music program, please email Dr. Gonzalez at dgonzalez@tusculum.edu.