GREENEVILLE – Student-led efforts at Tusculum University to promote voter registration and casting a ballot, all part of the institution’s extensive commitment to civic engagement, have yielded honors from a national organization. 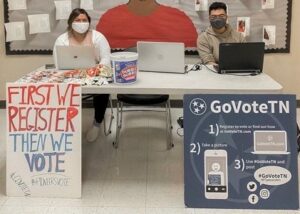 The ALL IN Campus Democracy Challenge has selected Tusculum for its inaugural Most Engaged Campuses for College Student Voting recognition. Tusculum was one of only five higher education institutions in Tennessee and one of 394 nationwide to earn this designation for making intentional efforts increase student voter participation. The university was also one of 184 campuses in the United States to participate in the Ask Every Student Initiative, which encourages engagement in the democratic process and achievement of full student voter registration.

In addition, ALL IN has issued Tusculum a bronze seal for having a student voting rate between 50 percent and 59 percent in the 2020 elections. Tusculum was one of only three Tennessee higher education institutions and 88 across the country to achieve this level.

“We are proud of our students for emphasizing the importance of participating in the electoral process,” said Dr. Shelby Ward, director of Tusculum’s Center for Civic Advancement and an assistant professor of interdisciplinary studies. “Through their hard work, students are playing an active role in the future of our local communities and the nation by selecting their leaders at the polls.”

ALL IN fosters civic culture and institutionalizes democratic engagement activities and programs at colleges and universities. The organization seeks an electorate that reflects the nation’s makeup and in which college students are democratically engaged on an ongoing basis, during and between elections, and not just at the polls.

Estefania Juarez, a senior political science major, who led the 2022 registration effort on campus, said students wanted to focus on voter education in the fall. In particular, they sought to convey that mid-term elections and local elections deserve a citizen’s attention. She noted that voters in these elections can be the difference in a candidate winning or losing an election in their congressional district or in a city or county race.

For that reason, students invited Kristin Girton, an alderwoman in Greeneville, to campus in October to speak about the importance of local elections. Students received positive feedback from the community for spotlighting the value of participating in mid-term elections.

“We got a lot of people registered on campus that were not previously registered,” Juarez said. “If they were new voters, we encouraged conversations about local issues and especially the four amendments that were proposed to the Tennessee constitution.”

The 2020 election featured the presidential vote, so students’ education efforts were a little different. Ben Gall, a senior accounting major, who led that drive, said students focused on subjects such as the Electoral College, details about the U.S. House of Representatives and U.S. Senate and the candidates running for them as well as the reason a person’s vote matters.

“We talked a lot about how to register to vote and what it takes to be registered because sometimes there are differences between the states in the process,” Gall said. “We made a lot of effort to help people get registered that fall because it was a very important election for a lot of people. It had one of the largest voter turnouts in recent U.S. elections.”

Gall said students made registration easily accessible by bringing materials to classrooms, having them available in hallways, showing registration apps that could be downloaded and giving codes students could scan to go to registration websites.

“We took a diverse approach in trying to help get people registered for the elections,” he said. “That’s something I really like about our students here – they have so much passion about working on voter registration and promoting civic engagement, not just in the local community but in the nation as well.”

Gall and Juarez are extremely active on campus. Among their roles are Gall serving as Student Government Association president and Juarez serving as outreach chair for the Bonner Leader Program and an SGA senator.

“Civic engagement is a major component of our mission, and we commend our students for embracing their responsibility as citizens and setting a positive example for society by registering to vote and then going to the polls,” said Dr. Scott Hummel, Tusculum’s president. “The student leaders who have driven these efforts deserve tremendous credit, and I am confident they and their classmates will positively impact their communities and the nation throughout their lives.”