GREENEVILLE – Enhancing student life on campus, Tusculum University has created a special place to enjoy downtime, a cup of Joe and an array of fun activities that enrich personal lives. 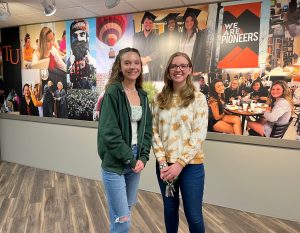 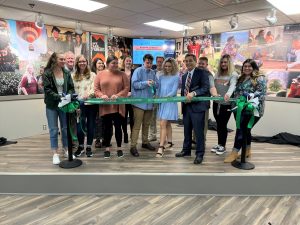 Tusculum students, faculty, staff and alumni as well as community leaders participate in the ribbon cutting.

Tusculum held a grand opening Tuesday, April 26, for The Pioneer Perk, a hangout area for students located next to the merchandise section of the university’s bookstore in the Scott M. Niswonger Commons. It features the opportunity for students to play table tennis, billiards and air hockey or simply relax in one of the many seating areas.

Adding to the ambience, The Pioneer Perk offers students the opportunity to purchase coffee or visit one of the vending machines. The Pioneer Perk also includes a stage for a variety of performances, such as karaoke, open microphone and a battle of the bands. In the back of the stage are two attractive murals that depict the campus atmosphere. 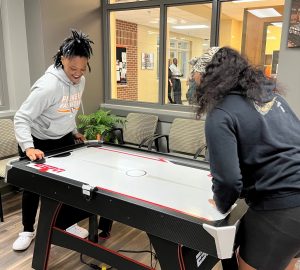 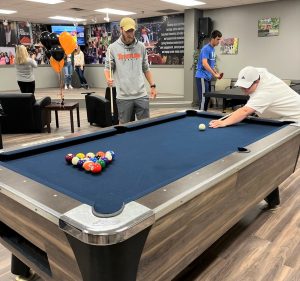 “The Pioneer Perk was a student-driven initiative to take the campus experience at Tusculum to another level,” said Dr. Scott Hummel, Tusculum’s president. “Students came up with the name ‘Pioneer Perk,’ provided input on the layout and designed the murals. I am thrilled with the outcome and know it will strengthen the collegiate experience for our students.”

Soon after Dr. Hummel became president in 2020, he began hearing from students about their desire to have a space like The Pioneer Perk. He supported the idea as a way to supplement Tusculum’s outstanding academics and collaborated with the Student Government Association, the Office of Student Affairs, art and design students and the facilities management department to bring the idea to fruition.

The Pioneer Perk was funded in large part by a donation from Kelly Vogt, a 1983 Tusculum alumnus, in memory of his father, Joseph, who also graduated from the university. 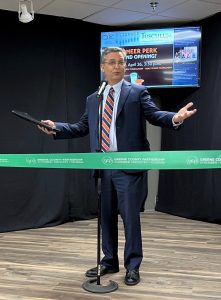 Dr. Scott Hummel, Tusculum’s president, speaks before the unveiling of the murals. 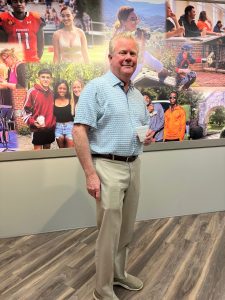 The Pioneer Perk was funded in large part by a donation from Kelly Vogt, a 1983 Tusculum alumnus, shown here, in memory of his father, Joseph, who also graduated from the university.

The Pioneer Perk was previously located in the space where Chick-fil-A is now housed. Caleigh Blair, the SGA’s president, remembers it from her visits to her sister, who was a student then, and saw how it built community within the Tusculum family. She said the return of The Pioneer Perk in its new location will provide a place for students to hang out with their friends and meet other Pioneers.

“I love it,” Blair said. “It’s so modern in the way it looks, and I think my fellow students are going to love it, too. It’s important to have gathering places outside of student living spaces. I really like the stage. I can’t wait to see what student talents can be brought to it.”

Students Lilliana Gall and Gwen Gustafson designed the murals on the wall behind the stage, and it was hung by Silver Star Design, owned by Jason Emmette. Gall and Gustafson selected photos for the mural and made adjustments based on feedback from stakeholders throughout the university. The murals show the diversity of the campus experience – academically, socially, athletically and ethnically – and highlight the university’s strengths.

“One of the important elements of a Tusculum education is providing active and experiential learning for our students,” said Lanna Monday, assistant professor of art and design. “Working on the murals was a great opportunity for Lilli and Gwen to put their skills to use in a practical way that simulated a real work situation in which they had to respond to client feedback. This project will definitely help prepare them to be career-ready professionals.”