GREENEVILLE – Tusculum University has recognized Andrew Johnson Bank for its significant investment in the higher education institution’s recent fitness, wellness and strength initiatives with the naming of a special space on campus. 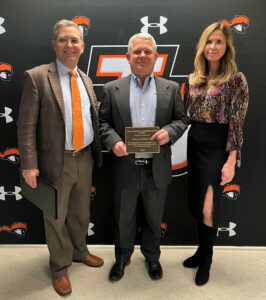 During a ceremony Wednesday, Dec. 14, Tusculum unveiled a plaque for the Andrew Johnson Bank Lobby outside the new athletic weight training area. The recognition was for the bank’s support of that facility and the Wellness Center, a new fitness area for all Tusculum students, faculty and staff. Both facilities, which were opened in the summer. are located on the lower level of the Scott M. Niswonger Commons.

The bank was not the only one celebrated during the event. At the bank’s request, the lobby was named in honor of Doug DeBusk, a 1995 Tusculum graduate, who serves as executive vice president and chief lending officer at the financial institution. The plaque notes his passion and dedication to the bank and the university.

“Andrew Johnson Bank is the definition of a strong local community bank,” said Dr. Scott Hummel, Tusculum’s president. “The bank supports the community and has a long history of supporting the university and our students. Their investments in Tusculum and our students are by extension contributing to the strength of Greene County and its citizens. Through its support, the bank is enhancing Tusculum’s $58.3 million annual economic impact and improving the quality of life in our community.”

With the support of the bank and other donors, Tusculum created a specially designated area within Niswonger for athletic weight training. That freed space for the university to develop the Wellness Center in a different area on the same floor, which contains an array of equipment, such as treadmills, elliptical machines, weight machines and dumbbells. More items will be added to that facility in the future. 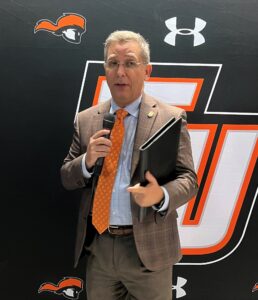 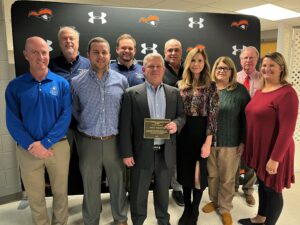 The Andrew Johnson Bank team gathers after the ceremony.

Virtually all of the items in these two facilities are new.

Doug Jones, Tusculum’s vice president of athletics and university initiatives, said the new weight room has been a game-changer for the athletic department. The additional space has enabled teams to be in the room together instead of having to split into groups. He said the Wellness Center has been a major benefit for nonathletes, faculty and staff, who now have greater access to fitness equipment.

“This has changed the dynamic of our campus completely and is a huge deal for us,” Jones said. “We’re extremely grateful for everybody who has assisted the university. Andrew Johnson Bank has been a great supporter of this university in my 25-plus years here, and it means a lot.”

The bank and the DeBusk family

The bank’s support for Tusculum includes numerous large projects, such as the renovation and expansion of the Thomas J. Garland Library and construction of the state-of-the-art Meen Center and the Niswonger Commons. The bank has also contributed to the athletic program.

“We feel really blessed to have Tusculum University in our community,” Paige Hull, the bank’s president and CEO, said during the event. “We are proud today to be able to partner with you on this project to help your student-athletes, your nonathletes, faculty and staff have a great place to work out and stay healthy. I’m also proud to honor Doug DeBusk today and thank him for all he does for our community and our bank. It is really special to celebrate him, and it is also amazing to reflect on the legacy that his family has had at Tusculum University.” 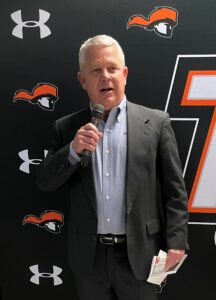 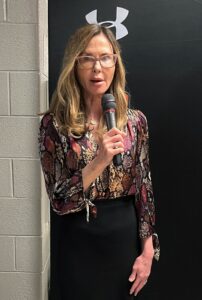 Doug DeBusk was an all-conference guard for the Tusculum men’s basketball team. A member of the university’s Sports Hall of Fame, he scored more than 1,000 points and is the program’s all-time leader in assists with 735.

His brother, Frankie, was Tusculum’s head football coach for 18 years and athletic director for eight years. Their popular father, Louis, who was affectionately known as “Big Coach,” served as a volunteer assistant coach for the Pioneers. Doug’s daughter, Delana, is currently a freshman guard on the Tusculum women’s basketball team, and his son, Dylan, is a 2020 graduate of the university and former Pioneer football player.

“Honoring Doug DeBusk is perfectly appropriate because he represents the best of Andrew Johnson Bank and has played a vital role in Tusculum’s progress,” Dr. Hummel said. “His family’s deep roots at Tusculum are a great source of pride for us, and we are grateful he has entrusted his son and daughter to us.”

Doug DeBusk was touched by the gesture.

“At Andrew Johnson Bank, helping friends is our business, and that’s what it’s all about,” he said. “We’re excited to be part of the community with Tusculum University. You are a pillar of the community, and we’re thankful that you are in our community and for the revenue you put back in the community. I’m honored for the recognition today, but it’s not about me. It’s about all of you.” 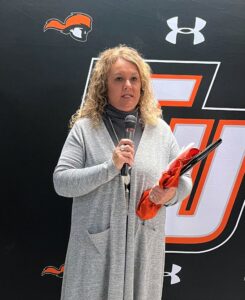 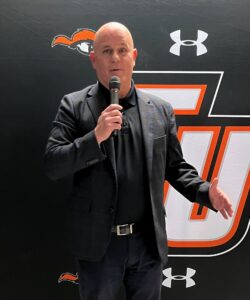 “Tusculum is proud to provide active and experiential learning in a caring Christian environment, which leads our students to become civically engaged, career-ready professionals,” she said. “We are also focused on our students’ physical and spiritual well-being. We cannot accomplish all of our strategic goals and mission without the support of others. Andrew Johnson Bank and other philanthropic individuals and businesses are making a difference in our students and the university.”

Donations for The Wellness Center and athletic training facility, as well as other projects and needs at the university, are still welcome. People can visit www.tusculum.edu/giving to donate or contact Kidwell at kkidwell@tusculum.edu or 423-636-7303 to discuss potential gifts.