GREENEVILLE – Savor the season with some great music in a terrific setting as the Tusculum University Community Band holds a Christmas concert on campus. 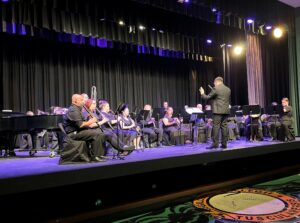 Enjoy a performance of the Tusculum University Community Band Tuesday, Dec. 13, in the Marilyn duBrisk Theatre. 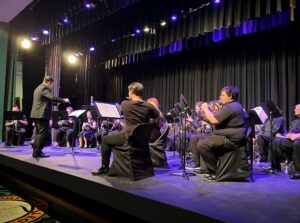 The Tusculum University Community Band performs in the Marilyn duBrisk Theatre in February.

The community band will perform Tuesday, Dec. 13, at 7:30 p.m. in the Marilyn duBrisk Theatre of Annie Hogan Byrd Fine Arts Center. Conducted by Dr. David Gonzalez, Tusculum’s director of bands, the group will play some Christmas classics as well as other songs that align with the season.

The concert is free.

“Our concert is taking place when people are really developing the Christmas spirit,” Dr. Gonzalez said. “It will also dovetail nicely with the Tusculum University Community Choir concert the week before, enabling attendees to bookend their Christmas celebrations with two fantastic evenings of music on our campus. We look forward to entertaining the audience and encourage the community to join us for a relaxing concert.”

Songs the community band will play are:

The community band features about 50 members from different parts of the region as well as Tusculum students. New members are always welcome, with practices every Tuesday at 7 p.m. at Chuckey-Doak High School leading up to a concert. After this concert, the community band will begin rehearsals in January for its next performance.

In existence since 1971, the ensemble was previously known as the Greene County Community Band.

Anyone who is interested in becoming a member can email Dr. Gonzalez at dgonzalez@tusculum.edu.