GREENEVILLE – Sit back and relax and have an opportunity to vote on your favorite selections during the Tusculum University Concert Band’s upcoming performance. 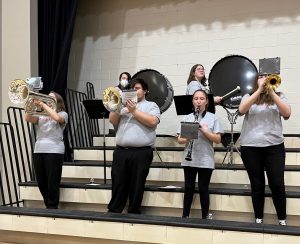 The Pep Band performs at one of the home basketball games this year.

The band will take the stage at 7 p.m. Thursday, April 28, in the Marilyn duBrisk Theatre of Annie Hogan Byrd Fine Arts Center. The performance will consist of Tusculum students playing a range of musical selections, many with upbeat rhythms, for the audience’s enjoyment. The event will feature solo and duet performances, as well as songs performed by the entire Tusculum Pep Band.

The concert is free.

“Our students have contributed significantly to the ambience of many Tusculum events this year, and they look forward to showing their musical skills to a broader audience,” said Dr. David Gonzalez, the university’s director of bands, who will serve as the conductor for this event. “As part of a university that values civic engagement, we welcome the community to join us for a fun evening of music. We will have an important role for the audience to play in this performance.”

The university restarted the Tusculum Band this academic year, and the group has made significant progress in its development. The band has performed at events such as the Farm to Table dinner during Homecoming and the reception for the inauguration dinner for Dr. Scott Hummel, Tusculum’s president. The Pep Band became a staple of the Tusculum men’s and women’s basketball home games this year, playing music and serving as a cheering section.

Now, as the academic year closes, the band will hold this concert for the Tusculum family and the community.

The beginning portion of the show will feature soloists and duets. Gracie Akins will perform “Gabriel’s Oboe” on euphonium, accompanied by Robert Hicks on piano. Jyclyn West on clarinet and Avery Carper on trumpet will perform “Duet for Two Clarinets H 638.” Then Hughston Burnheimer on horn, accompanied by Hicks, will play “Nocturno.”

Songs played by the full Pep Band will be:

Audience members will receive a sheet of paper asking them to rank each Pep Band song on a 1-10 scale, with 10 being the most positive score. Dr. Gonzalez said that will help the band determine what songs it should continue playing at future games. He will also ask audience members what songs they want to suggest.

For more information about the concert, please call Tusculum Arts Outreach at 423-798-1620. To learn more about the university, please visit www.tusculum.edu.