GREENEVILLE – East Tennessee students were recently honored during a ceremony at Tusculum University for a cross-section of projects that touched on frontiers in history. 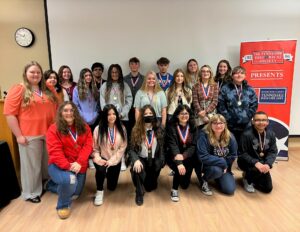 Medal awardees pose after the ceremony.

The event was part of Tennessee History Day, a yearlong program for students in grades 6-12 that engages educators and students to improve the teaching and learning of history in public, private and home schools. Tusculum hosted a district competition in five categories — performance, exhibit, website, documentary and paper. The university awarded medals to winning students whose work was judged by Tusculum faculty, staff and alumni as well as community members from a variety of disciplines throughout the region.

“Tusculum’s mission highlights the value of an active and experiential education, and Tennessee History Day is a perfect example of that principle in action for these students,” said Dr. Peter Noll, professor of public history and museum studies, who organized the event. “Our mission also emphasizes the importance of the Tusculum family being civically engaged, and we were delighted to connect with these students and their schools and support learning more about history.”

Students submitted their projects online for judges to review. During the Friday, Nov. 18, event at Tusculum, the judges had the opportunity to interview the students about the research and process of their projects and provide feedback. Students needed to submit a project that aligned with the theme “Frontiers in History: People, Places, Ideas.”

The district competition featured students from Cocke, Greene and Sullivan counties. The categories, results and names of the students, their school and their project are: 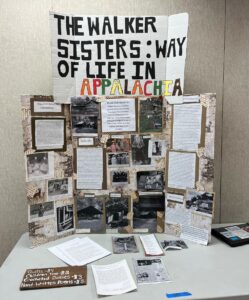 This is one of the exhibits in the competition. 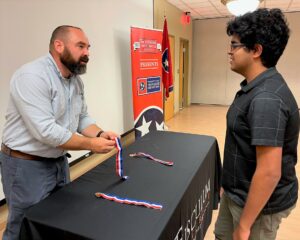 Dr. Peter Noll, left, presents a medal to one of the participants.

More information about Tennessee History Day is available at https://tennesseehistory.org/tennessee-history-day/. To learn more about the university, please visit www.tusculum.edu.