GREENEVILLE – Tusculum University, which has served the region and prepared students to be career-ready professionals for 228 years, provides an annual economic impact of more than $58 million to its home community of Greene County and other parts of East Tennessee. 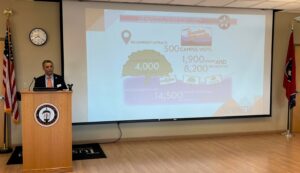 From the pay and benefits it dispenses to faculty and staff members to the additional expenses it incurs for daily operations, Tusculum is helping churn the region’s economic engine significantly. The university also supports the financial well-being of communities through the spending by our students and visitors who come for games, tours and special ceremonies. And a Tusculum degree results in higher salaries for graduates that reverberate in the community with even greater impact.

“We are proud to be located in Greene County and drive economic activity throughout East Tennessee,” said Dr. Scott Hummel, Tusculum’s president. “Our presence tremendously impacts the balance sheets of many businesses and budgets of various governments. Directly and indirectly, Tusculum University delivers great value to the region, producing outstanding graduates and stimulating the quality of life and financial stability of our region.”

Specifically, here are the numbers: 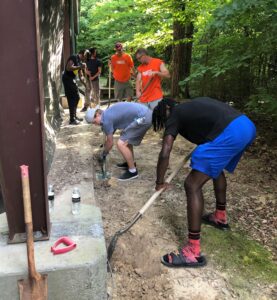 Richard Miller, associate vice president of institutional effectiveness, partnered with other Tusculum family members to collect the data. He continues to work with others at the university and in the community to refine the numbers.

“What we have identified so far are conservative estimates that do not tell the entire story about Tusculum’s regional impact,” Miller said. “However, this initial snapshot demonstrates that Tusculum is a major player in Greene County’s economy and also contributes to the financial health of neighboring communities. It is essential for people to understand that Tusculum’s reach goes well beyond the walls of our classrooms.”

Kevin Morrison, Greene County’s mayor, sees firsthand the impact Tusculum has on the community. He said the university is an integral factor in Greene County tourism by annually hosting the National Junior College Athletic Association Division III Baseball World Series in Pioneer Park. He also highlights the sales tax impact of Tusculum due to the many purchases made by Tusculum personnel and visitors.

As he reflects on the university, Morrison takes into account the cooperation Tusculum provides the community through the events held on campus. He also emphasized the value of the university with the diplomas and certificates it issues and said Tusculum’s impact is extremely visible through the alumni in the community. 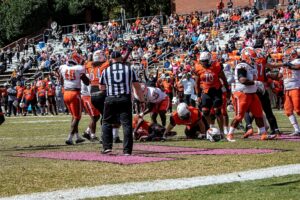 Football games are among the athletic events on campus that community members can enjoy and that stimulate the local economy. 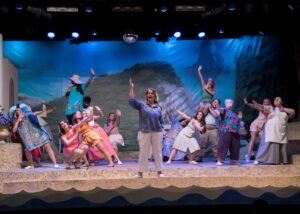 Mamma Mia! has been one of the theater performances available to the community at Tusculum University. Photo courtesy of Kristin Girton

In Greene County, Tusculum has 1,636 alumni living in Greeneville, 180 living in Afton, 147 living in Mosheim, 79 living in Bulls Gap and 46 living in Midway.

Tusculum alumni also live throughout the region, including 2,511 in Knoxville, 508 in Kingsport, 396 in Johnson City, 316 in Oak Ridge, 270 in Rogersville, 245 in Sevierville, 235 in Newport, 224 in Jonesborough and 159 in Bristol. These alumni are contributing to the tax bases, demonstrating civic engagement and serving as career-ready professionals in their communities.

“The value and importance of the university cannot be overstated, and the $58 million is probably very understated,” Morrison said. “Tusculum University touches every sector of the community and is a vital spoke in making Greene County so strong. We greatly appreciate Tusculum’s contributions to the Greene County economy and are pleased to have the university in our community.”

One company that has benefited considerably from Tusculum is Parker Hannifin, which operates a plant in Greeneville as part of its global footprint. Parker Hannifin makes hydraulic torque motors and hydrostatic transmissions. The Greeneville facility employs just under 500 people, and a large portion of the management team consists of Tusculum alumni. 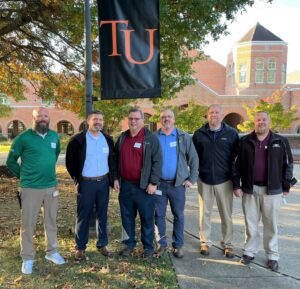 David Glasscock, the plant superintendent, who obtained a bachelor’s degree in management and a master’s degree in talent development from Tusculum, said the university has helped management team members gain additional knowledge that has enhanced their contributions to the company.

“Most of us were adult students, so our degrees related well to our work experience,” Glasscock said. “We could apply a lot of what we learned in our coursework to some of the initiatives at our company. It was very easy to link the two. You don’t always see that.”

Glasscock said Tusculum also offers a lot of expertise and training programs that can assist Parker Hannifin. He said Tusculum has additionally helped with some of the company’s research and development efforts. Having Tusculum nearby is a great benefit to Parker Hannifin’s plant, he said.

“Tusculum, as a higher learning institution, has been great for me and the other people who have received degrees from the university,” Glasscock said. “There is a personal touch. I waited awhile before I started back to school, and attending Tusculum flowed very well and was easy to do with the help of Tusculum staff. I would not be where I am today without Tusculum.” 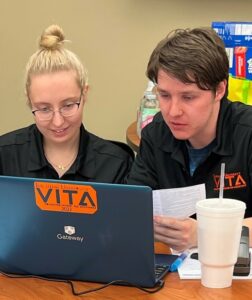 For example, Tusculum has participated in the Volunteer Income Tax Assistance program since the 2016-17 academic year. This initiative provides free tax preparation to qualified taxpayers in East Tennessee. Internal Revenue Service-certified student volunteers from the university and community members provide a valuable service to taxpayers who might not have the resources or expertise to prepare their own returns.

Tusculum’s Costume Shop has contributed significantly to theater productions in the region. The university has shared costumes with local schools, community arts groups and theaters as well as provided guidance to those in need.

During the height of the pandemic, Tusculum nursing students assisted the region by vaccinating residents against the coronavirus. Nursing alumni also served in New York when that city was experiencing a major load of cases in the early days of the pandemic.

“We provide an active and experiential education that benefits the community as well as our students,” D. Hummel said. “Our focus on civic engagement gives students the foundation to make a difference and strengthens communities. Combine that with the economic impact of the university’s programs and activities and the effect is profound.”