GREENEVILLE – Taking the next step in the succession process, the Tusculum University Board of Trustees has named Dr. Greg Nelson to lead the institution as acting president. 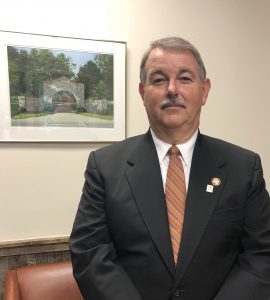 Nelson, who has served as board chairman since 2017, will relinquish that role to focus fully on the day-to-day operations of the university. Stepping in as chairman will be Tom Wennogle, president of Jarden Zinc Products in Greeneville, who had been serving as vice chairman.

“Tusculum University has distinguished itself as a pioneering education leader for 225 years, and we are poised for further growth with initiatives such as the Niswonger College of Optometry and enhancements to existing programs, which contribute to our success,” Nelson said. “Our students earn high-quality degrees and are well-prepared after graduation because of our expert and dedicated faculty and staff members.

“I am excited to collaborate with everyone at all three locations as we continue finding new ways to deliver the best educational experience possible. Tusculum also has longtime connections to Appalachia, and I am focused on developing and maintaining strong community relationships.”

Wennogle said Dr. Nelson is an ideal choice to serve as acting president because of his intimate knowledge of Tusculum from his five years of service on the board. That background and Dr. Nelson’s considerable leadership experience, analytical approach and ability to identify solutions will prove valuable as the university conducts its business, Wennogle said.

“Dr. Nelson is a visionary leader with the talent to assess people’s capabilities and build teams, and he has a deep love for Tusculum,” Wennogle said. “With Tusculum on a trajectory for long-term growth, he is a superb choice to move the university forward as we search for the next president. Tusculum is in excellent hands with Dr. Nelson at the helm, supported by an outstanding Executive Cabinet, faculty and staff.”

Dr. Nelson, who holds a doctorate in analytical chemistry from Emory University in Atlanta, retired in 2014 as senior vice president and chief technology officer at Eastman Chemical Company. Steadily progressing through the company’s ranks, Dr. Nelson held a number of leadership positions during his 26-year career at Eastman. He began his Eastman career as advanced senior research chemist.

Dr. Nelson holds a Bachelor of Science in chemistry, computer science and mathematics from the University of Alabama. He also graduated from the Harvard University Advanced Management Program and participated in a program on transformational leadership with Darden Executive Education at the University of Virginia. He and his wife Judy have been married for 36 years and have three children.

Wennogle, who has been a Tusculum trustee since 2015, has more than 30 years of executive and management leadership experience in a wide variety of corporate and operational positions. He has extensive experience in the North American, European, Asian and South American markets. He has also shared his time and knowledge by serving on multiple boards of directors for private businesses.

Wennogle holds a Bachelor of Arts in economics and business administration from Merrimack College and a Master of Business Administration from Northwestern University’s Kellogg Graduate School of Management. He and his wife April live in Johnson City.

“Tom is a model business leader who has a strong connection to Tusculum as the head of a company in the Greeneville community,” Nelson said. “He clearly understands the components of operational excellence and will provide valuable guidance to me and the others in the administration. Having partnered with him and the rest of the board, I will be able to hit the ground running. This is an exciting time to be a Tusculum Pioneer, and I am glad to be part of the team.”