GREENEVILLE – Many Tusculum University students and alumni are pioneers who establish a higher ceiling for academic achievement in their families by earning their bachelor’s degree. 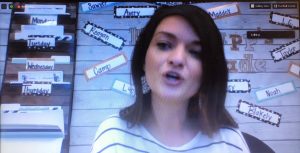 Whitney Tapp speaks from her classroom at Ridgeview Elementary.

Called first-generation students, they are the sons and daughters of those who did not obtain a bachelor’s. As they pursue their degree, these students receive valuable assistance from Tusculum’s Student Support Services and ARCHES programs. These are federally funded programs, and the U.S. Department of Education earlier this year awarded $617,000 in grants to support them for the next five years.

Tusculum held First-Generation Celebration Week Nov. 9-13 with varied online and virtual activities, including a panel discussion moderated by Shawn McClure, a first-generation student who is now an alumna and works part-time for the university. Joining her were two current students – April Gibson and Earthaiza Watkins – and two alumnae – Ashley Akins and Whitney Tapp.

“We are thrilled to recognize the achievements of our first-generation students and their contributions to our university,” said Rachael Barnett, SSS director. “These students represent more than 50% of our enrollment, and we are grateful for the opportunity to work with them and help them attain their career and life aspirations.”

Akins graduated from Tusculum in May with a bachelor’s degree in psychology, having studied at the Knoxville campus. This was her second try at college, with the first not going well. She turned to Tusculum at 36 after marriage, a child, a career in sales and her husband’s cancer diagnosis, which forced her to reexamine her career path.

Early into studies at Tusculum, she became involved in ARCHES – Adults Reaching Career Heights and Educational Success – which is designed for first-generation students who are in the adult and online studies program. It is a companion program to SSS, which is for traditional and commuter students. She said it was probably the best thing to happen during her years at the university.

“The ARCHES staff got me through college at 40 years old,” Akins said. “I graduated with honors and a 3.8 grade point average. I received tons of support, which helped because there were semesters that got so hard I begged to quit. I could never have done this without that kind of support. I can’t encourage people enough to find a support system because that is how you get through college successfully.”

Watkins is a junior business major on the Greeneville campus and a sprinter on the women’s track and field team. She described herself as a go-getter who enjoyed high school and studying but had to fit them around working a job as well. She wanted to go to college but did not have the help she needed at that time to attain this goal. But she believed in herself, followed her heart, trusted God and took the necessary steps to make it into college.

Today, she wants to serve as a role model for others and encourage them to pursue college. She said she enjoys serving as a big sister to others.

“I really appreciate SSS being there for me,” Watkins said. “One thing I learned coming to college is you need to have resources and communication because if you don’t communicate to anyone, seek help and ask questions, you’re going to be lost.“

Tapp is a Jonesborough resident who graduated from Tusculum in 2019 with a bachelor’s degree in elementary education. She now teaches second grade at Ridgeview Elementary in Gray. She started college at a traditional age but put it on the back burner when she had a child and began working in banking.

Seven years later, she decided she wanted to take her career in a different direction, so she searched the internet and concluded Tusculum was the best fit. As she began the process toward enrolling and throughout her years at Tusculum, she received extensive support from the ARCHES program.

“I had heard wonderful things about Tusculum and knew it was a private university,” Tapp said. “I didn’t want to go to a large college because I didn’t want to be another face in the classroom. I knew in order to get where I wanted to be, I needed a support network. I needed a college that was going to focus on me and what I needed, and that’s what I had heard about Tusculum. I did not realize until later in my education at Tusculum how big of a support system SSS truly is. Those who work in that program genuinely want to sit down and listen to you and figure out how to overcome your obstacles.”

Gibson, who lives in Rogersville, grew up in a household that valued good grades and completing homework, but life was not easy for her. She did not graduate from high school but earned a GED a few years later and had her sights set on college.

That did not happen for several years, but a friend who had overcome difficulties to earn bachelor’s and master’s degrees and is a Tusculum alumna, urged her to pursue her degree. This friend’s husband, for whom Gibson worked, is a Tusculum alumnus who also advocated for her to seek a degree. Gibson enrolled in the AOS program in the summer and is seeking a business degree with help from the ARCHES program.

“I wanted more from life and wanted that degree for myself, not for other people,” said Gibson, who is now a grandmother. “It’s been trying working a full-time job and taking the classes online as soon as I get home. But I don’t care how old I am. I’m determined to earn my degree. A lot of people have dreams of being rich and having fancy homes. My dream is to have my college education and to walk across the stage and know that I have done it.”

To learn more about the SSS and ARCHES programs, please visit www.tusculum.edu.